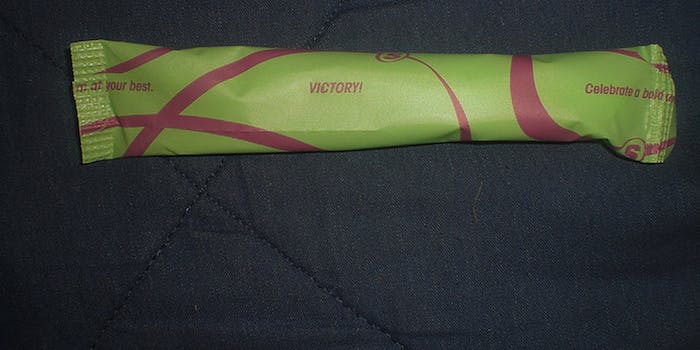 Concealed handguns are just fine, of course. You really can’t make this stuff up.

Just so everyone is clear: For an hour on Friday, tampons were not allowed at the Texas State Capitol, but concealed handguns were just fine.

You really can’t make this stuff up.

The bill has been brought back to the Legislature by Governor Rick Perry after narrowly failing, thanks to an 11-hour filibuster by State Senator Wendy Davis—and scores of pro-choice protesters who screamed the bill to death.

The measure would put a ban on abortions after 20 weeks, require all abortion providers to have hospital admitting privileges and require the procedure must be performed at an ambulatory surgical center. Opponents of the bill say these measures would place an undue burden on working-class women. Supporters say they are just looking out for the health of the mother.

Other items are being taken up as well during the debate this evening—basically anything small enough to throw at the Senators. But thanks to the rules of the Internet, Twitter is shining a light on the irony that women cannot even bring in tampons to watch their reproductive rights be taken away.

I’m sorry but if you’re taking away a woman’s right to choose the least you can do is let her throw a tampon in ur face. Be a sport, #TXLege

Guards at Texas Capitol apparently are asking: “Is that a tampon in your pocket, or are you just here to watch #txlege #HB2?

Wait what if I have a TAMPON GUN #txlege

It took Texas Senator Kirk Watson speaking out to get tampons approved.

Thanks to @kirkpwatson for getting DPS to stop confiscating tampons. Tampons now allowed at TX Capitol #standwithTXwomen #txlege #hb2