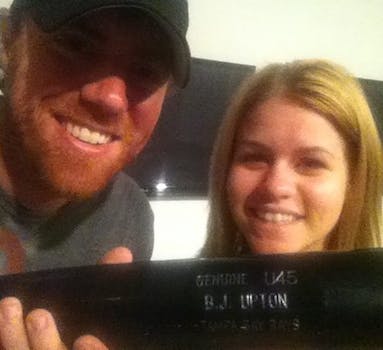 Tampa Bay Rays star gets lost wallet back thanks to Twitter

After hitting three homers against the Texas Rangers, B.J. Upton had just enough luck left to get his wallet returned.

Sunday was an eventful day for B.J. Upton.

On the upside, the Tampa Bay Rays center fielder hit three home runs in a home win over the Texas Rangers. But there was a dampener on his career-best showing when his wallet fell out of his truck and into the street later in the day.

Upton may have been set to cancel his credit cards when Florida resident Brent Sutton tweeted at the player, telling Upton he’d found the wallet.

Within two hours of Sutton telling Upton to “hit me back and we can find a way to get it to you,” Sutton had returned the wallet. To show his appreciation, Upton gave Sutton a souvenir bat.

Sutton thanked Upton for the gift, calling him a “super nice guy and a monster on the diamond.”

Back in May, NFL free agent Chad Ochocinco wished “Tyrannosaurus Rex diarrhea” on someone who stole his wallet. While the item was returned by a Twitter follower, his Starbucks gold card was still missing. The coffee chain sated Ochocinco’s worries when it offered to send him a new card.

It’s not clear if anything was missing from Upton’s wallet when it was returned, but it’s obvious that his luck didn’t come to a halt on the diamond Sunday.