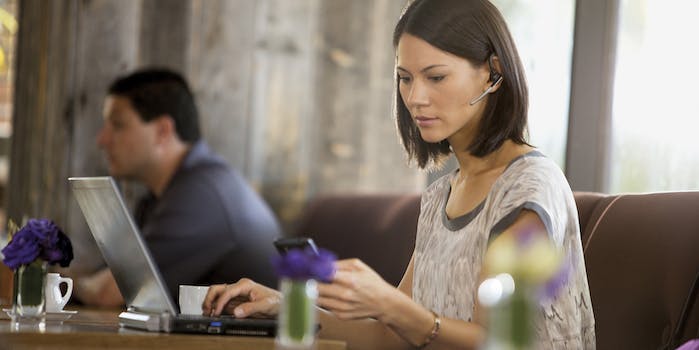 Women will never make more money if men don't speak up and #TalkPay.

May 1 honors International Worker’s Day in almost every nation in the world—with the notable exception of the U.S.—and on this year’s observation of the date, #TalkPay took over Twitter. The hashtag invited tech industry workers to talk about their salaries, creating a transparent discussion about who is earning how much and where. But it wasn’t a chance to compare salaries for the purpose of gloating, negotiation, or despair: It was meant to spark a conversation about wage disparities, focusing on the radical gap between what men and women earn in the industry.

Spearheaded by tech worker Lauren Voswinkel, the movement quickly exploded on social media, but one of the most interesting things about the data that emerged was the data that didn’t emerge. Many participants were reluctant to discuss their salaries because of nondisclosure agreements or out of fear of retaliation, for example, leaving out a large chunk of the industry.

here's the thing: if i shared my salary under #talkpay and my employer retaliated, i'd be out of more than a job; I'd be out of the country.

In an analysis of the data generated by the tag, BuzzFeed found that approximately 20 percent of the tweets on the hashtag appeared to contain salary numbers (the site used an algorithm because it would have been functionally impossible to comb through tens of thousands of tweets). This includes repeat tweets from users who wanted to ensure a wider reach, as well as tweets from the same user reporting salaries at multiple organizations—in other words, it’s likely that fewer than 20 percent of the users active on the hashtag actually disclosed their salaries.

But people who were afraid or reluctant to share their salaries while still being interested in the conversation weren’t the problem. Another chunk of the industry simply declined to participate.

i really, really encourage white men who follow me to please participate in #talkpay.

i'm seeing a really suspicious absence of white male tech workers in #talkpay. really, guys? tell us what you make.

In the midst of a discussion about pay inequalities in tech, the group making the most money, and standing the most to benefit from inequality, decided by and large to refrain from submitting data points. Without this information, discussing the pay gap is extremely challenging. While #TalkPay was a fascinating conversation that revealed a great deal about how people approach the subject of talking about money, one thing it didn’t do was offer insight into the depths of the wage gap in Silicon Valley, and that wasn’t for want of trying.

Time to show my privilege. #talkpay

Talking about salaries is critical. In an opinion editorial at Model View Culture introducing #TalkPay, Voswinkel articulated why the conversation needs to happen.

Pay inequality based on gender and race is allowed to thrive in the current environment. If things continue in this fashion, it will likely get worse. For inequality to truly be addressed, discussions of pay need to become commonplace. I have heard numerous stories of egregious pay inequality in tech. A woman told me how a new hire she managed was making tens of thousands of dollars more than her salary. I myself have had the direct experience of discovering that, while being significantly more qualified and experienced than many of my peers, I was making less than nearly everyone else on the team by a significant margin. These stories could not happen in an environment where open salary information existed. It would become impossible for an employer to pay someone significantly less than an employee in a similar position, regardless of race or gender. Discriminatory practices cannot withstand open scrutiny; unfortunately, the past 40 years have been spent creating an environment wherein open discussion is socially taboo.

Salary transparency creates a world in which people can negotiate fairly when they receive job offers. It also creates a clear incentive to create standardized salaries based on experience, education, and skills—if a company knows that everyone will know how much it pays, it doesn’t have the option of discriminating against women and other minorities. In particular, the racial pay gap is often neglected in conversations about pay inequality, though it’s a critical element of talking about pay; knowing what white people of all genders make is critical for people of color when they’re involved in salary negotiations.

If a company knows that everyone will know how much it pays, it doesn’t have the option of discriminating against women and other minorities.

“Public debate about pay inequality has only recently begun to progress beyond telling women to ‘lean in,’” Nitasha Tiku wrote for the Verge. “That phrase, popularized by Facebook’s Sheryl Sandberg, suggests that if women assert themselves without seeming threatening, they can make as much as their male counterparts.”

#TalkPay highlighted the fact that just being a lady isn’t enough—women have to fight for their rights even if they’re perceived as aggressive or brash by their male colleagues.

The stark level of discrimination is perhaps most elegantly illustrated by this testimony from a transgender man discussing his experience in the industry.

He was one of the few men who participated in the conversation, and his incisive comments about pay inequality and bias were a sharp condemnation of the extreme gender bias in tech. They also echo the testimonies of trans men in other industries, who have noticed extreme differentials in pay and workplace respect before and after transition—sometimes even at the same job.

This is by no means a problem limited to the tech industry, as journalist Jess Zimmerman pointed out:

At my last FT job I was brought on at around $45K. Male predecessor had made 65. Throwing a tantrum about this 3yrs later got me 50 #talkpay

Writer Melissa Gira Grant wryly spoke to another component of the conversation about #TalkPay: the fact that the women in tech who’d originated the conversation were making more than the journalists writing about it.

Many of those same journalists hedged the issue in their discussions of the subject, even as they demonstrated why it was so important. At Wired, Emily Dreyfuss wrote:

How can we make sure men and women are paid equally for equal work? Well, one simple way to at least start is to make it clear what everyone makes. After all, we can’t know we are being paid less unless we know what everyone else is being paid. … And yet. I hesitate. It’s a game of chicken. It’s most useful if we all do it. I want us to close our eyes and tweet in unison. All of WIRED. All of Conde Nast. All of the media. All of everyone.

Ultimately, she couldn’t bring herself to enter that taboo number, to do the thing that so many people are afraid of doing and talk about money. In a culture where discussing salaries is considered gauche and inappropriate, there’s a heavy stigma against salary disclosure, especially for women, who are warned that talking about money is unladylike and will expose them to the risk of retaliation for being uppity.

Many men refuse to work in solidarity with women to discuss the pay gap.

One reason it’s so heavily stigmatized, however, is that many men refuse to work in solidarity with women to discuss the pay gap, and they don’t put their money where women’s mouths are. Had large numbers of men shown up to #TalkPay, the shape of the conversation could have changed dramatically.

In this case, “what about the men?” was an entirely appropriate question to ask, but none of the men showed up to answer it. As Voswinkel noted, “The lack of knowledge regarding reasonable salaries and predatory behaviors in tech companies can be directly attributed to the social taboo surrounding people talking openly about their salaries.” With men refusing to contribute to the body of knowledge surrounding pay and workplace culture, it’s impossible to engage with the problems of the pay gap.

Oh—in case you’re wondering, as a transgender journalist, writer, and editor with 10 years of industry experience and an undergraduate degree, I made $49,000 last year.

Photo via plantronicsgermany/Flickr (CC BY ND 2.0)