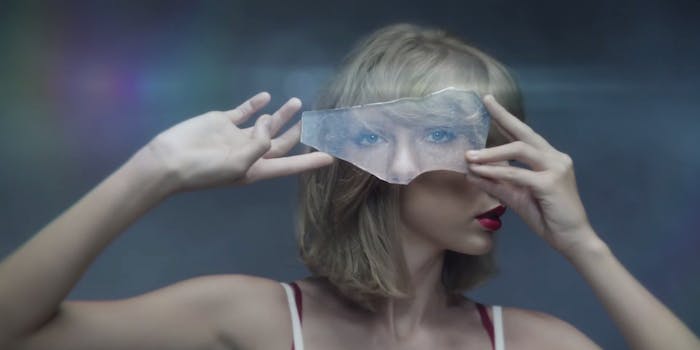 How to talk to white people about Taylor Swift

It's time to shake off the bias for white women.

The Internet’s got problems with Nicki Minaj. And not even Taylor Swift can solve them.

In a “feud” that had nothing to do with Swift, or even Katy Perry, numerous reports have fixated on a supposed rift between the “Bad Blood” singer and the artist behind the Vevo record-breaking video, “Anaconda.” One of them got a MTV Video Music Award nomination, the other one didn’t—and in a moment of understandable frustration, Nicki Minaj took to Twitter to share her thoughts.

However, Minaj’s criticism of institutional sexism and racism in the music industry and awards shows was interpreted by Swift as a personal affront, as the Daily Dot’s Alexandra Samuels notes. Whereas Minaj spoke in broader terms about the industry’s preference for mainstream, white (and white female) artists, Swift made the issue about her, when it wasn’t. Minaj never even mentioned Taylor Swift’s name, nor did her words implicate Swift directly. It’s a vast departure from last year, when she subtly threw tons of shade at Iggy Azalea’s cultural appropriation both during and after the BET Awards.

But both moments have one thing in common: White people on the Internet, and especially men, have rushed to the defense of white women, even when they’re in the wrong or may be misunderstood—as Swift herself has now admitted in an apology.

I thought I was being called out. I missed the point, I misunderstood, then misspoke. I’m sorry, Nicki.
@NICKIMINAJ

For the two main culprits, look no further than the cantankerous, disgraced, and mansplainer extraordinaire Piers Morgan, and Swift bestie Ed Sheeran—both of whom act as white knights coming to the rescue. In an op-ed for the Daily Mail, Morgan dubbed Minaj a “stroppy little piece of work whose video wasn’t as good as Taylor Swift’s.” Sheeran, defending his friend, discredited the criticism, citing Beyoncé’s Video of the Year nomination as a counterargument against any claims of bias.

Not once did either of these men, nor did other people like them, attempt to understand or empathize with Minaj’s evident weariness with the unbearable whiteness of awards shows and popular music. “Anaconda” took a classic hip-hop song—where a black man praises the curves of black women in spite of white, Eurocentric beauty standards that make white women the default—and celebrated her humps on her own terms. Minaj gave a middle finger to the male gaze, showing that she can indeed exercise control and authority over her sexuality, absent what any man thinks.

But, of course, when black women dare to create sexual art that also serves as social commentary, they’re chided for “objectifying women and themselves” or deemed unacceptable because they supposedly don’t exercise class, refinement, and more reservation about their sexuality. All of these values are not only part of a politics of respectability, where a marginalized individual isn’t deemed inherently of importance or regard unless they act in a way that pleases white people.

For Minaj to critique and industry that praises white women like Swift and Azalea, while the creativity of black women gets appropriated or deemed lesser, was thusly deemed unacceptable. Instead, it interpreted as an attack on white womanhood—and the institutional privileges associated with it.

And in defending white female artists like Taylor Swift, Sheeran, Morgan, and others usually land on one of these flawed arguments.

There’s a reason why black women, including Minaj, have had to defend their skin color, their hair, and even their curves—because the media and society regards white, fair-skinned, silky-haired, thin women as the default for beauty and sexual attraction. It’s a double-standard derided by the likes of Viola Davis, after New York Times writer Alessandra Stanley dubbed the How to Get Away With Murder star as “less classically beautiful” than other leading (read: white) TV actresses.

When “Anaconda” dropped last summer, as I’ve previously noted, Minaj decried how, on the cover of Sports Illustrated, white women could wear swimsuits and thongs, with their derrieres facing to the camera, and be deemed “acceptable.” But Minaj squatting in a pink g-string, wearing baby blue high top kicks, for the song’s cover art, was somehow deemed “tacky” and “unacceptable.”

2) “Taylor Swift was right—Nicki Minaj is a terrible feminist”

Nothing could be further from the truth.

Healthy debate and contention is essential to elevating the conversation, and Minaj’s power analysis points to how the people calling the shots in the music industry have a strong bias for white womanhood and anything in close proximity to it. Women like Taylor Swift, Katy Perry, Miley Cyrus, and others may benefit from that, and it’s not necessarily their fault. But the least they could do is be openly accountable and admit that their race and their body image allows them to benefit in ways that women of color, or women who aren’t thin, get otherwise shut out.

However, Swift has apologized, recognizing that she took it personally, missed the point, and misunderstood. Maybe now she “gets it” and understands she has a privilege that Minaj doesn’t. That doesn’t make Minaj the enemy, it means Minaj will have more barriers to overcome before she can ever get anywhere close to the same opportunities as Swift.

3) “Taylor Swift isn’t part of the problem. After all, she’s friends with black women”

Taylor Swift hangs out with Beyoncé and Jay-Z. She’s friends with Tiana from Empire. And in her exchange with Nicki Minaj, Swift expressed love and admiration for her. It’s a common idea that being around black people is a “Get-of-Jail-Free” card, but just because Taylor Swift’s #SquadGoals include black women doesn’t mean her politics do. After all, even Charleston shooter Dylann Roof had a black friend.

Swift probably isn’t sitting in a backroom, secretly meeting with industry executives and scheming about how she can screw over black women with her work. She can indeed be friends with black women and still have a higher degree of institutional and social power because of her race and her body image. People can still have friendships across lines of privilege and limitation based on their identities.

Sometimes, though, they may make mistakes in relating to people who are different and need to fess up to it when called out. Swift admitted that she made a mistake—but when will she speak up about the issues Minaj was addressing?

4) “The music industry and awards shows don’t keep black women down. If they did, then how do you explain Beyoncé?”

Ed Sheeran may prefer “thinking out loud,” but maybe it’d be more helpful if he took a pause before he speaks. In his defense of Swift, a close personal friend, Sheeran dismissed Minaj’s critique, telling the Daily Telegraph, “Minaj is a bit redundant. Her point is that you have to be skinny and white to get a Video of the Year nomination, but Beyoncé’s ‘7/11’ is in there, and that is celebrating the female figure in every form.”

In other words, Sheeran said, the VMAs can’t possibly have a problem with black female sexuality, because a black woman got a Video of the Year nod.

Indeed, Beyonce leads this year’s VMA nominations, with five total for “7/11.” She’s also worked incredibly hard over the nearly 20-year span of her career. But she’s also a fairly mainstream artist, has lighter skin, and—up until her self-titled release album—she expressly avoided getting involved in any politics of race, gender, or sexuality, fearing it would take the focus away from her music.

Although “Drunk in Love” was nominated for “Video of the Year” last year, in which she talks about riding her husband like a “surfboardt,” the song and video was relatively more tame and more subtle than the likes of an “Anaconda.” And Beyoncé still lost to Miley Cyrus.

Now that Beyoncé has amassed significant power, influence and wealth within the music industry and popular culture, she’s indeed a pop and R&B artist, and an unstoppable force. Minaj may be indeed popular, but “Anaconda” colored outside of the lines. While that might earn women like Cyrus wins at the VMAs, the rules are different for black women.

Awards shows are indeed competitions and, of course, fans of each artist will defend their favorite to the bitter end. But when it comes to awards shows and how the music industry conducts itself, black women have usually received the short end of the stick, especially when they don’t look or behave in ways that fall in line with mainstream, white cultural norms. In the 32-year history of the VMAs, only 12 black female solo artists have ever been nominated—and only 5 have won.

As the Daily Dot’s own Nico Lang notes, the case is similar at the Grammys, where women of color—like Minaj and Beyoncé—tend to get pushed out of the major categories. In the case of this year’s VMA nominations, it was the same story—Nicki Minaj got nods for Female Video and Best Hip-Hop Video, but not the evening’s top honors.

In this case, as Minaj astutely observes, it’s not about one artist being better than the other, it’s about one artist benefiting from social and institutional preference for white womanhood over black womanhood. That might make for a little bad blood on Twitter, but it’s even worse politics.