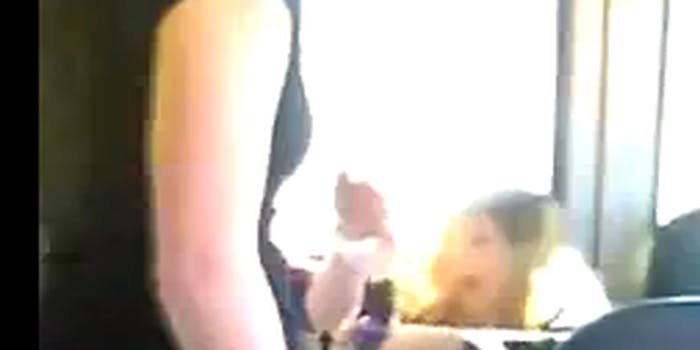 Here's one advantage of technology's iron-fisted grasp on teenagers: When bullies bully, they get filmed and they get caught.

Here’s one advantage of technology’s iron-fisted grasp on teenagers: When bullies bully, someone might whip out a smartphone and film them, then upload the video to Facebook. The result? Bullies in jail.

That’s what happened to two teens in New Port Ritchie, Fla., on Friday after one viciously attacked 16-year-old Chase Cristia at the back of the school bus. Her accomplice recorded the whole thing on her phone, then posted it to Facebook.

You watch Cristia try to protect herself, covering her face with hands. She doesn’t fight back. On Feb. 1, police arrested the 17-year-old who beat up Cristia and charged her with battery. They arrested her accomplice, too. All three are sophomores at Mitchell High School, near Tampa.

Things haven’t improved much for Cristia since their arrest, however. Tampa Bay Online reported:

Instead of attending her third-period history class, Cristia called her mother from a school bathroom, crying. She said students were teasing her and told her she brought the trouble on herself.

Her mother, Tracy Cristia, picked her up from school and took her home.

If only the police could make arrests for non-violent bullying, too.