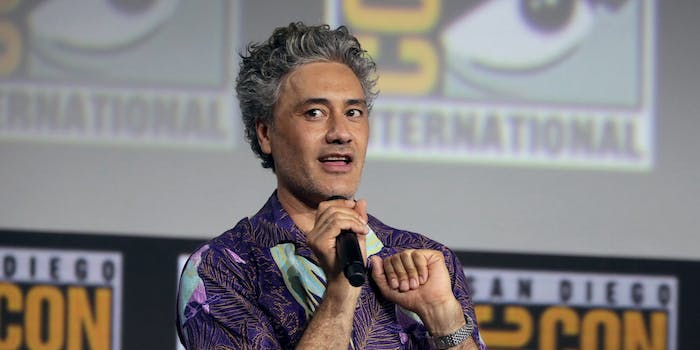 He dished some details on the upcoming 'Thor: Love and Thunder.'

Amid the more polished (and dare we say it, annoying) lockdown content from celebrities like Gal Gadot and John Krasinski, filmmaker Taika Waititi just delivered a characteristic dose of chaos. On Thursday night he hosted a live rewatch of his movie Thor: Ragnarok while simultaneously making dinner. The livestream featured guest appearances from Tessa Thompson and Mark Ruffalo, and a few hints about Thor: Love and Thunder—some of which sounded real, while others were very clearly fake. Like a screencap from a scene with Tony Stark.

Regarding the actual script, Waititi said, “It’s so over-the-top now in the very best way. It makes Ragnarok seem like a really run of the mill, very safe film… this new film feels like we asked a bunch of 10-year-olds what should be in a movie and just said yes to everything.” That includes “space sharks,” which are indeed a real thing in Marvel canon. He didn’t confirm whether Beta Ray Bill is involved or if Christian Bale is playing him (a popular fan theory since Bale was cast in the movie), but he did say he loves the character.

It looks like we’ll see more of Miek and Korg (played by Waititi), a pair of aliens who appeared in Ragnarok and Endgame. Apparently we may get an introduction to Korg’s culture, which in the comics is an all-male race of rock monsters who reproduce by… holding hands and walking into a lava flow? Never change, Taika Waititi.

He also shared some unavoidably grainy concept art from Love and Thunder, featuring the New Asgard settlement and a more feminine-looking version of Miek, who in one of the images is wearing a skirt-suit. (Miek is referred to as male in Ragnarok, but since he’s introduced by Korg and Korg comes from an all-male species, you can understand him potentially misunderstanding the concept of gendered pronouns.)

It sounds like the creative process for Love and Thunder is still very much in flux. Due out in February 2022, we know that Natalie Portman will return as Jane Foster, and Tessa Thompson’s Valkyrie will have a female love interest. What we don’t know is whether Loki will still be involved—a character who feels essential to the franchise, but is technically dead in the main MCU timeline. We probably won’t hear more about Loki until his Disney+ series airs next year.