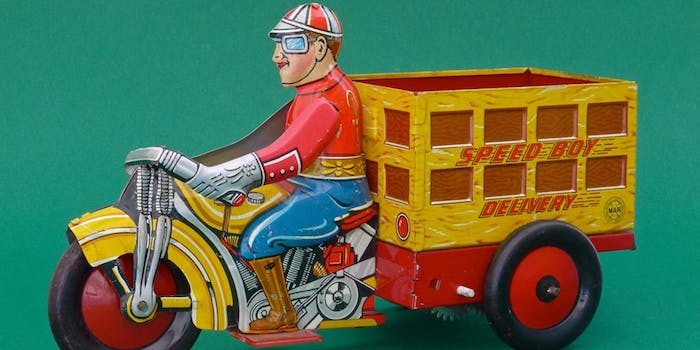 With gorditas delivered right to your door, who ever needs to go outside?

With the Internet, you never have to go outside anymore, not even when you’re stoned and craving a Beefy 5-Layer Burrito.

This is the thinking behind Taco Bell’s recent announcement, which revealed that the famously creative Mexican fast food chain is working on a delivery service. “Even though it’s the No. 1 request from consumers, we have to make sure we can give them an experience that’s consistent with Taco Bell,” declared the company’s CEO, Brian Niccol. “We have to figure it out, and I can tell you right now we don’t have it figured out.”

Figuring out what experience is “consistent with Taco Bell” shouldn’t be that difficult for anyone who’s ever been up too late and craving food when everything else is closed. This latest development out of Taco Bell is significant though, if not for Taco Bell than for the greater delivery ecosystem. In 2015, there’s nothing you can’t order online. It may be Taco Bell today, but who knows what it’ll be tomorrow.

Amazon might’ve been the beginning of the trend, but their Prime Now service, which functions sort of as Amazon-on-steroids, delivering your package in one to two hours, could be the future. Ultra-fast, touch-of-a-button, digital convenience is already becoming a lifestyle. In last weekend’s edition of the Kernel, Dylan Love detailed his own relationship Internet delivery services, which enable his shut-in tendencies. “My apartment’s charms are strong, and technology makes them stronger,” Love writes. “On-demand Netflix-style entertainment has a certain universal appeal, sure, but a number of tech startups have stepped up to expand the everything-on-demand-at-home dream into delightful reality. Whatever you need, brought to your door. It starts with Amazon.”

With the Internet, you never have to go outside anymore.

Love goes on to extol the might of Jeff Bezos‘ empire from there. “Any high-functioning shut-in worth his salt spends big bucks on home-delivered Amazon items that he’d otherwise be buying from the store: toothpaste, toilet paper, some groceries, cat litter, and whatever else the heart desires,” he states. “Amazon repeatedly enables my low-grade agoraphobia by eliminating what would otherwise be necessary trips out of the apartment.”

However, Bezos’ company wasn’t the first business with the idea of bringing groceries and other household items directly to consumers. But their AmazonFresh service is definitely helping to popularize it. Love’s larger point, however, is that with the advent of Internet delivery, there isn’t anything you can’t get brought to you. And everyday, big and small tech companies alike are trying to get in on the action.

In an article for Medium, Lauren Smiley argues that companies like Shyp, Seamless, and GrubHub market the convenience aspect of such services, but the reality is not so altruistic. “Many services promote themselves as life-expanding—there to free up your time so you can spend it connecting with the people you care about, not standing at the post office with strangers,” Smiley writes. “Rinse’s ad shows a couple chilling at a park, their laundry being washed by someone, somewhere beyond the picture’s frame. But plenty of the delivery companies are brutally honest that, actually, they never want you to leave home at all.”

The Internet has made delivery culture more accessible than ever, but in so doing, it’s taking the humanity out of the equation.

The Internet has made delivery culture more accessible than ever, but in so doing, it’s taking the humanity out of the equation. Mitt Romney famously claimed that “corporations are people, my friend,” but in the digital age, they sure don’t act like it. When our Amazon Wish List can be granted at the click of a button, not only do we have access to whatever we want, we don’t have to talk to anybody to get it. We have access to whatever we want, almost whenever we want it, just beyond our fingertips.

There are pros and cons to the new era of Internet delivery culture. Along with the aforementioned convenience aspect, online shopping often helps to eliminate the ridiculous write-ups you find at certain stores; after all, there’s a reason shoppers refer to Whole Foods as “Whole Paycheck.” But the bottom line for delivery prices can negate the cost benefits of discount shopping. In Britain, a number of supermarkets are working to meet customers’ demand for online shopping, but while some offer free shipping, the Guardian reports that Tesco, a popular U.K. grocery store, charges up to £15 for their services. With those operation costs—in the form of handlers, drivers, and drones, etc.—the potential for inflation is staggering.

There’s also the simple question of how necessary a delivery-based economy actually is. Do he endless supply of delivery apps really make our lives better? Smile argues, that despite the charms of an on-demand economy, it’s also leading to a trickle-down economy of class privilege.

In many ways, social class can be defined by the chores you don’t do. The rich have personal assistants, butlers, cooks, drivers. The middle class largely do their own errands—with the occasional babysitter, pizza boy, maybe a cleaner. The poor do their own chores, and the chores of other people. … The luxuries usually afforded to one-percenters now stretch to the urban upper-middle class, or so the technology industry cheers. But can you democratize the province of the rich without getting a new class acting, well, entitled?

The inventions that are meant to make our lives simpler often serve only to make them more complicated. Will all the negative externalities of the convenience era ultimately become harder to keep up with than just going to the grocery store? Consider Amazon’s new Dash button: These devices are small, wireless buttons, meant to be placed around your house, in areas where you run out of products that you frequently use. So, for instance, if you run out of milk, and you know you’re going to buy more, you put your Oberweis button or whatnot on the fridge, and just press it when you need more. This sends a signal to Amazon, to instantly order you some milk.

Once you push the button, you still have to check in at Amazon to confirm the purchase. That will be happening a lot since anyone who sees one of these buttons—guests, uninformed spouses, and especially kids—will be pushing it all the time out of curiosity, with no idea what it does. Some people will think that through the magic of technology the button will dispense Tide on the spot. This is typical idealism, which permeates the tech scene, especially with the “Internet of Things.”

The “Internet of things,” for those not in the know, is the idea that one day everything will be connected to the same network, be it people, animals, or objects, possessing a unique identification specific to them; this would, thus, enable seamless digital communication and data transference. The idea is directly related to the rise of wearables and “smart” technology, though the rise of delivery culture could theoretically lead to the same conclusion. What is electronic delivery, after all, but a way for us to stay connected while receiving what we want as quickly as possible?

Jersey City is currently working to curtail chain stores on its streets, with a new bill proposing that “only 30 percent commercial space downtown” be available to businesses that have “10 other properties within 300 miles of Jersey City.” Such legislation speaks to the death of chains IRL, but as Love and Smiley show, there will always be a home for them online. Americans are increasingly sedentary and don’t really need any more reasons not to leave their houses, but with the proliferation of the Internet, there’s no shortage of reasons to stay home on a Friday night.

Whether you see it as a savior or the harbinger of an oppressive “Internet of Things,” the possibilities of the burgeoning delivery economy are as endless as they are mind-boggling. What isn’t clear yet is whether online delivery will become the consumer’s main means of shopping in the future or just one of an increasing number of consumer options. For now, Taco Bell and the like merely show us the way to a potential revolution.

In the future, you’ll still be able to go outside. But you won’t need to.

Chris Osterndorf is a freelance journalist whose work has appeared on the Daily Dot, Mic.com, Salon, xoJane, and The Week. When he’s not writing, Chris enjoys making movies with friends. He currently lives in Los Angeles.