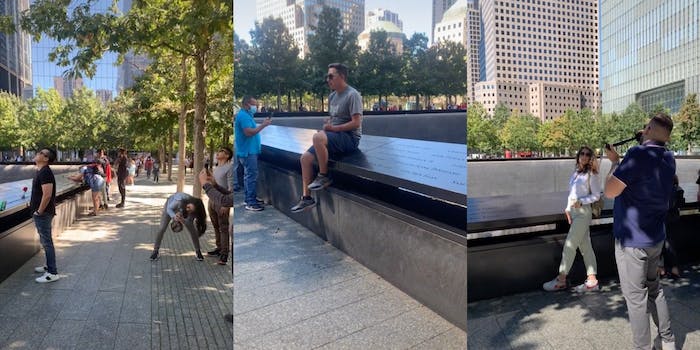 ‘How do people see it as a photoshoot opportunity?’: Viral TikTok shows people taking tacky photos at 9/11 memorial

'I can understand taking photos, but the dude sitting on their names draws the line.'

Long Island-based travel blogger Joanne (@backpackerflipflops) filmed and posted the video from late October, and since then it has gone viral on the social media platform. Over 1.5 million people have viewed the video, which shows numerous patrons taking pictures of themselves near—and even directly on top of—the 9/11 Memorial Pools in lower Manhattan.

The footage shows people having their picture taken by others and posing with photographers. One particular man sat on top of the pool rim, covered in the names of people who lost their lives during the tragedy.

The memorial consists of two large square pools that sit in the footprints of the former North and South Towers of the World Trade Center. The pools are surrounded by the names of those who died during the attacks. The 9/11 Memorial and Museum notes that the names are grouped by locations and circumstances in which the victims died, and that the “the sound of the cascading water makes the pools a place of tranquility and contemplation separate from the bustling noises of the city.”

Joanne noted in the comments that “security chased them all within seconds! But, unfortunately, it is so common and so disrespectful to people trying to pay respect.” Replying to another comment, she also said that she would “go to the memorial to get videos of names for people who can’t get to NYC to see loved ones’ names.”

For one commenter, like most, the sitting on the names at the 9/11 Memorial Pools “made [her] stomach churn.”

One of those who commented on the video said, “I literally had tears in my eyes at this memorial; how do people see it as a photoshoot opportunity.” Another user added: “This makes me so mad! Why would anyone sit on there?!? I cannot with people.

Another TikTok user who commented added: “I can understand taking photos, but the dude sitting on their names draws the line.”

Others said that people have crossed the line in other ways, saying that “one of the times I went someone bought a bunch of flowers to stick in the names, and a rando person took on and put it in her hair for photos.”

The Daily Dot reached out to @backpackerflipflops for additional information.