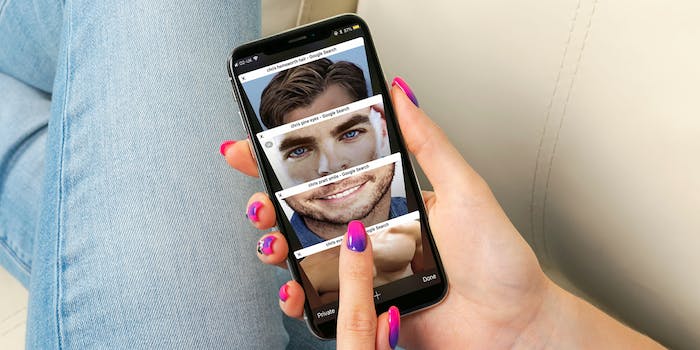 If you're bored, why not open a few tabs and create some monsters?

If you grew up in the ’80s, you might remember a toy called the Mighty Men & Monster Maker. It consisted of three sets of plastic plates, one each for the head, chest, and legs. The idea was that you could combine the plates in various ways, put a piece of paper over them, and rub a crayon around to create a variety of different monsters and heroes.

It was a pretty fun way to kill time on a rainy Saturday. The toy only came with 17 plates for each body part, though, so you’d eventually run through all 4,913 combinations, and that would be that. Of course, if you were creative, you could draw your sister’s head on some tentacles (but then you’d get in trouble with your mom so it wasn’t really worth it).

Now someone has figured out a new way to play the game with virtually unlimited options. You don’t even need a crayon. All you need to do is open up a few tabs in the Safari browser on your phone.

The meme took off when Twitter user @havinyourbaby combined Harry Styles’ head with the (recently arrested) Lucky Luciano’s torso, some legs from the “quiet as a mouse” meme, and a photo of Timberland boots. According to at least one user, however, the meme had already been around for a few months.

Here’s another version with Grant Gustin, aka The Flash.

Of course, the fun doesn’t have to stop there. What about an ALF/Vin Diesel/André the Giant hybrid wearing some toe shoes?

Or perhaps you want to create the ultimate Chris?

Now you don’t have to choose! pic.twitter.com/QXAMAk8Nci

Don’t be afraid to open a few tabs and start creating your own mashups. All you need to get started is a smartphone with the Safari browser and a lot of time on your hands. Once you’ve used Safari to search images for each body part (starting with the head), select the button in the lower right-hand corner of the screen to stack the search results.

The possibilities are endless! Of course, some of us prefer to stick with monsters.