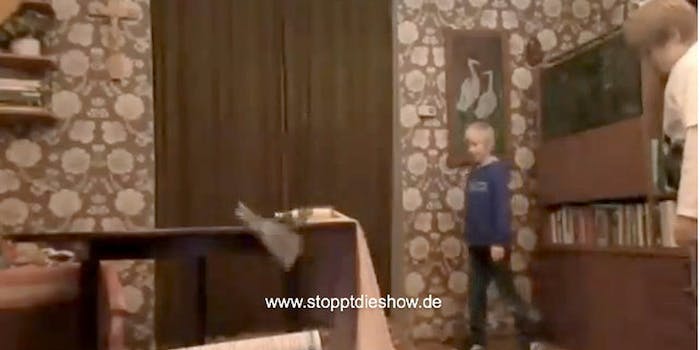 These kids try to pull the tablecloth from under you

Was someone hurt making this video-- or was it all just an act.

Leave it to the social news site Reddit to turn a video of the “ultimate trick” into the ultimate lie.

In the video series called “Michel and Sven – The Tablecloth Trick” two boys try to pull a tablecloth out from underneath a table topped wine bottles, a vase, and some flowers. They fail repeatedly.

But in the fourth, and seemingly, last video, one of the boys successfully yanks the tablecloth out from underneath a pile of dishes only to bump into the blond boy standing behind him and trigger a chain reaction: That boy is thrown into a wall unit full of books which then falls right on top of him in a thundering crash.

The video was posted on Reddit today with the title “The Ultimate Trick.” It reached the front page and collected more than 500 comments, mostly from people speculating that the second boy did not actually get hurt.
The Daily Dot has reached out the YouTube account that posted the video and is waiting to hear back.

“It’s fake. Keep watching the blond kid,” wrote ikeeelformoney. “He keeps positioning himself to get hit. But I guess most redditors already noticed that.”

Redditor iufreak even compiled a list of his findings:

* The kid doing the trick automatically looks at the blond kid rather than the outcome of his work.

* The blond kid begins moving backward early, pulls his arms in, ensures his head doesn’t hit the entertainment center and appears to intentionally fall in what would be the best place (largest opening) so long as the TV is fake.

Other redditors, like Jinhit, took a more practical approach to mythbusting the video by visiting the German website on which it was originally posted. Once translated — using Google  (so it wasn’t perfect) — the site had the following message:

“After attending the GOP vaudeville shows no psychological or physical harm of our guests have become known. Michel & Sven enjoying perfect health! And Mrs. Boeckel – Mother of the campaign – is an enthusiastic GOP supporter.”

The GOP is a theatre in Hannover, Germany, that specializes in modern art performances, according to the Hannover website.