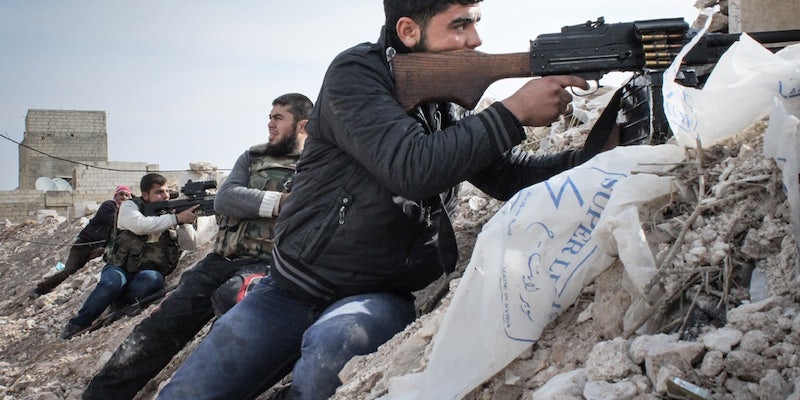 YouTube videos showing the execution of unarmed soldiers could be used as evidence of war crimes.

The graphic video originally appeared on YouTube Thursday and shows 10 men face-down on the ground near a building and lookout tower, each wearing nothing more than a T-shirt and camouflage pants.

“I swear to God that we are peaceful,” one of the men said, according to a translation by Reuters. The man tries to talk to the rebels, but returns holding his arm after a gunshot is heard.

The prisoners try to plead for their lives with the cameraman, who then brings his gun into view and shoots the men. Other captors kicked the prisoners together before they started shooting them from multiple directions.

The New York Times reported that since the Syrian conflict was defined as a civil war by the International Red Cross in July, the soldiers are subject to the Geneva Convention, under which executing a soldier who isn’t in combat and doesn’t have any protection is a war crime.

The United Nations believes that if the video can be verified, it could become evidence of a war crime.

“It looks very likely like this is a war crime, another one,” Rupert Colville, a spokesman for Navi Pillay (the UN high commissioner for human rights) told reporters.

The execution video—as well as a Freedom Halab video which appears to show a massacre that killed dozens—have been watched thousands of times respectively since they were both uploaded to YouTube on Thursday, but have yet to be removed by the video-sharing site, even though they both appear to violate YouTube’s Community Guidelines on “graphic or gratuitous violence.”

However, it is unlikely that Syrian citizens will see these videos any time soon. The country has been without Internet access since Wednesday, causing Google to reopen its Speak2Tweet service so that Syrians can get messages out by telephone, which will then appear on a Twitter feed.