The country has entirely "disappeared from the Internet," according to security experts.

Multiple sources have indicated that the country is either bereft, or nearly so, of all public access. Internet monitor Akamai reported that traffic dropped precipitously. Google confirmed the outage, reporting in its transparency report that its sites had experienced “disruption,” and Dan Hubbard, CTO of Security firm Umbrella Labs, wrote on his company’s blog that “it seems Syria has largely disappeared from the Internet.” He added:

Effectively, the shutdown disconnects Syria from Internet communication with the rest of the world. It’s unclear whether Internet communication within Syria is still available. Although we can’t yet comment on what caused this outage, past incidents were linked to both government-ordered shutdowns and damage to the infrastructure, which included fiber cuts and power outages. 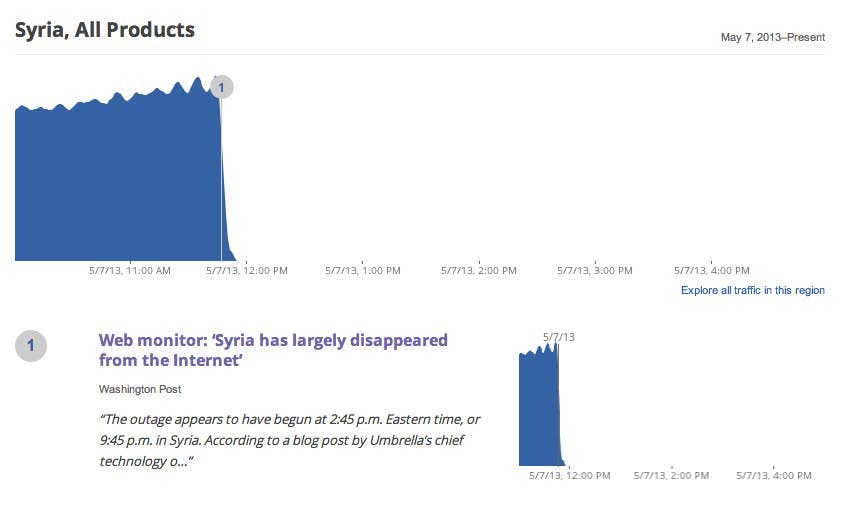 Syria’s Internet access previously went dark for two days in November 2012. As observed by the Washington Post, many at the time feared that the blackout was a sign of a major government crackdown that never materialized. Cloudflare, a security firm that detailed Syria’s earlier blackout, declared that this one seemed to use “the same technique that was used to withdraw Syrian Internet access last November.”

Many on Twitter quickly passed around instructions for how Syrians can supposedly get online via a dialup code, though it’s unclear how those in the blacked-out country would be able to receive such information.