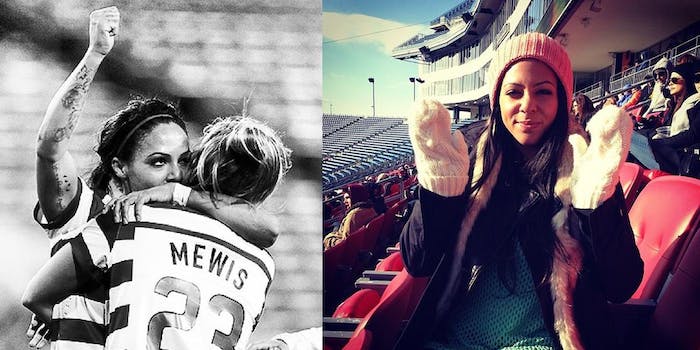 Soccer, racism, and Twitter have long been a Venn diagram of cultural fail that has plagued the sport on an ongoing basis.

For a while now, Soccer, racism, and Twitter have been a Venn diagram of cultural fail that has plagued the sport on an ongoing basis. While it’s not as if the problem hasn’t received a great deal of media attention, most of the debate has focused on the European and International leagues.

But over the weekend, U.S. women’s soccer forward Sydney Leroux found herself at the center of a race-fueled Twitter controversy on this side of the pond, after she celebrated a goal by reacting to alleged racist behavior from the Canadian crowd.

Leroux, who is originally from Canada, grew up dreaming of playing U.S. women’s soccer–a crime for which some Canadian fans have found it difficult to forgive her. At Sunday’s match, cries of “traitor” and “Judas” could be heard throughout the crowd–along with, allegedly, racial slurs.

Prior to the game, the Canadian online forum Voyageurs planned to assemble in the crowd and chant a song that mocked Leroux’s parentage:

He’s a deadbeat and he left you

’cause he doesn’t love you.

Additionally, numerous reports surfaced of the crowd chanting the ‘N’ word at Leroux, and booing her throughout the game.

When Leroux scored the final goal of the game, she briefly touted her U.S. jersey and made hushing signals to the crowd. In response, she received a yellow card for taunting the crowd. Later she tweeted to her 90,000 Twitter followers about the incident:

When you chant racial slurs, taunt me and talk about my family don’t be mad when I shush you and show pride in what I represent. #america

Immediately, soccer fans on Twitter backlashed, declaring that Leroux had made up the accusations of racial chants and was “playing the race card.” Later, Leroux clarified in a formal statement that her tweet was in response to an incident that happened in Vancouver last year, not specifically Sunday’s match.

But by then, Twitter had already taken over where the crowd may or may not have begun.

@sydneyleroux stupid fucking nigger mongrel bitch. go eat a fucking banana and get run over by a bus

@sydneyleroux classless bitch.. You deserve the racist and hatred chants.. Grabbing that crest ignited us all.#.fuckuidiotamerican

As Twitter exploded in debate about whether the racial chants actually happened, bystanders hurled insults at Leroux, Canada, America, and each other. The hashtag #SupportforSyd channeled support for Leroux and other players enduring racism in the game.

My final word on Leroux. I’ve been wondering, what does her mother think, deep down inside? We’ll probably never know.

Late Monday, Leroux spoke again about the incident, stating that she wasn’t going to focus on the naysayers:

The type of abuse I have received in the past and via social media for my decision to play for the U.S. is a step backwards. It is sad that people are inclined to write these incredibly negative comments, but I am not going to focus on them moving forward.

But if the debate surrounding Leroux is any indication, it may be a long time before soccer fandom can focus on anything else.