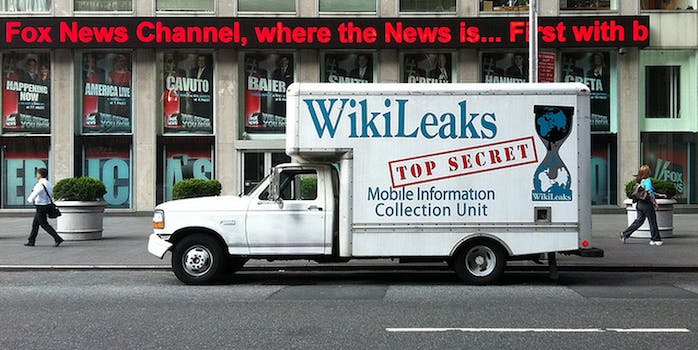 Was Assange's luggage, containing WikiLeaks documents, lost or stolen in 2010?

WikiLeaks has filed a criminal complaint in the Swedish courts alleging that the seizure in September of 2010 at Stockholm’s Arlanda airport of “WikiLeaks material, associated data and privileged communications” constituted “unlawful interference in its journalistic activities.”

An affidavit (PDF) by WikiLeaks’ Julian Assange asserts that the governments of Sweden and of Germany (where Assange traveled from Sweden) cooperated with American intelligence to illegally monitor and then seize information necessary to his work as a journalist.

Assange claims his luggage, containing WikiLeaks documents, was missing when he arrived on a direct flight to Berlin. The luggage was never found, and in most cases either not looked for at all, or not looked for with the urgency normally found in a missing luggage case.

Assange was scheduled to meet journalists Stefania Maurizi of L’Espresso and Holger Stark and Marcel Rosenbach of Der Spiegel. The meeting with Maurizi had been arranged via unencrypted email. Intelligence officials could have intercepted that communication and intercepted the materials he was going to share, he said.

The “Collateral Murder” video, showing a 2007 U.S. airstrike on Baghdad that killed 8 people (including 2 Reuters employees) had been released at this time, and Pfc. Chelsea Manning had been arrested for her theft of classified materials in Iraq. The so-called “Afghan War Logs” were published, and U.S. officials were aware that WikiLeaks had diplomatic cables it intended to publish.

Through those cables, Assange said, he “learned of secret, informal arrangements between Sweden and the United States,” which “revealed that Swedish intelligence services have a pattern of lawless conduct where US interests are concerned. The US diplomatic cables revealed that the Swedish Justice Department had deliberately hidden particular intelligence information exchanges with the United States from the Parliament of Sweden because the exchanges were likely unlawful.”

What exactly Assange hopes to accomplish legally is uncertain. What he hopes to accomplish in terms of the court of public opinion is fairly obvious. If Swedish law enforcement and intelligence are as hamstrung by their relationship to the U.S. as Assange claims, it will make the charges pending against him in Sweden’s courts a great deal less compelling.

Assange has asserted that the sexual violence charges brought against him in Swedish court are a function of the country’s vassal status to the United States, that the U.S. pressured Sweden to recharge him after the initial charges were dropped. Should this campaign result in the charges being dropped again, perhaps Assange would feel able to leave the Ecuadoran embassy where he has been holed up for over a year.