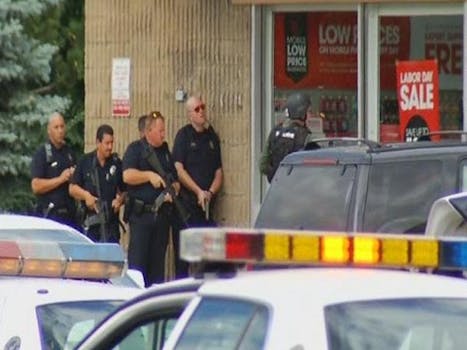 At least one person has been held hostage and four nearby elementary schools are on lockdown after an attempted robbery went awry, KUSA reported, and the situation is playing out on Facebook.

Denver Police and SWAT officers are in the process of negotiating with one of the suspects, who is currently in the Colfax RadioShack. Fox affiliate KDVR has identified that individual as Chris Nimerfroh, a 19-year-old single father and RadioShack manager.

The other suspect, a 20-year-old male, has not been identified yet, and a friend told reporters that the suspects did not plan to stand down, even after trying to negotiate with him.

“We’re not coming out,” Nimerfroh said, according to longtime friend Ernest Watson, who spoke with him on the phone. “We’re going to be in jail for life, Uncle. We shot at cops.”

Police have evacuated the area and told local businesses to stay inside after a report of two gunshots inside the building.

They have also put four nearby elementary schools on lockdown or modified lockdown, and nobody will be allowed in or out of the school until police give the go-ahead, reported Denver Public Schools spokeswoman Kristy Armstrong.

Nimerfroh, whose close friend was recently killed by Aurora police, has updated his Facebook profile throughout the hostage situation with photos of himself in the store, and he is afraid to leave the store, according to a woman who identified herself as his sister-in-law.

Nimerfroh’s mother has cancer and a recent blood transfusion, according to his ex-wife.

This is still an ongoing situation.