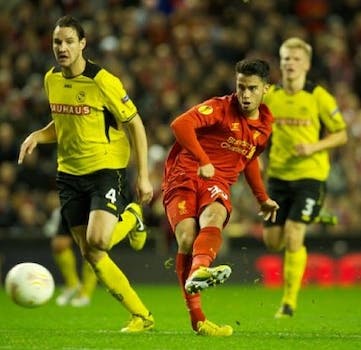 19-year-old Liverpool star Suso was fined by the Football Association for a tweet that "included a reference to a person's sexual orientation."

Suso needs to be a little more careful about what he tweets in future.

The Liverpool player was fined £10,000 ($16,248) by the Football Association (FA) after a comment about teammate José Enrique on Twitter in November.

Suso, 19, shared a photo of Enrique having his teeth whitened along with the caption, “What f*** is he doing? This guy is gay… he does everything except play football.” He later deleted the tweet and reposted the photo with the comment, “”I dunno what to say…”

The FA announced the fine Tuesday and added that Suso, full name Jesus Fernandez Saez, was warned about his conduct.

In a statement, it said, “The charge, which the player admitted and requested a paper hearing, was that he acted in a way which was improper and/or brought the game into disrepute in that the comment was posted on his Twitter account and included a reference to a person/s sexual orientation and/or disability.”

In August, Manchester United’s Rio Ferdinand was fined £45,000 ($72,900) for improper conduct after sending a tweet about Chelsea player Ashley Cole. The Barclays Premier League released social media guidelines for players ahead of the season kicking off in August. Let’s hope for Suso’s sake he pays closer heed to them.