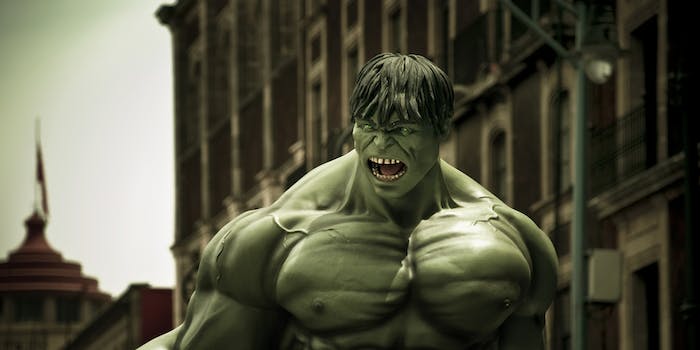 When I do CrossFit, I still tell myself: "You're becoming Batman."

I first borrowed Stan Lee’s How To Draw Comics The Marvel Way from the library when I was in the fifth grade and have checked it out many times since. As one could guess from the title, it is an instructional cartooning book which lays down the basics of creating or reproducing Golden Age, Jack Kirby-style comic book characters. It contained an illustration of Captain America beside an average human male—to demonstrate the ideal difference in physique of a human and a superhero.

The Cap’n was a half-foot taller. He had meaty thighs, broad shoulders topping a triangular torso, and the neck of an ox. The specimen of the average man on the page was lean and athletic—much fitter than the average man of today. Standing beside Captain America, who was the embodiment of wartime bluster and jingoism, Joe Schmoe looked like a tall ten-year-old.

I internalized something among the card catalog and microfilm: superheroes are better than me. I mean, they’re super, right?

Believing I was inferior stuck with me. A little later, I became a devoted follower of Cable, a hyper-macho tertiary character in the X-Men universe. He was the first character I was enamored with, a middle-aged, messianic antihero integrally woven through the mythological universes. Some artist’s interpretations were, well, “right out of a comic book,” to quote the late, iconic Jim Kelly.

Cable was depicted as having massive arms (one of which was cybernetic!), tactical gear with a thousand pockets and compartments around a flapper’s wasp waist, and a huge gun. Sometimes he had many fanciful guns and an assortment of swords and knives. He was loaded down like a prepper’s mule. He had a tiny head crowned with cropped gray hair and a missing, scarred eye.

This awful mishmash of features left him looking vaguely Mel Gibson-ish, but I loved him. I collected and read everything I could find related to Cable and still catch up on the story arcs on his Wikipedia a few times a year.

My fascination with superheroes peaked when I was in middle school, the same time span of Superman’s death and Batman’s paralyzation. I lost my early fervor for comic books, but costumed Übermensch were still occasional companions in my late teens, when I became obese, eventually weighing 347 lbs. When I looked at myself, I didn’t match up to the archetype I had programmed myself to value and respond to. I didn’t look like Batman—hell, I didn’t even look like Robin, and I hated it. I busied myself with creative projects and didn’t pursue romantic relationships, convinced I was undesirable.

I grew up and had a succession of bad relationships and worse jobs. I was in a band or four, was an intern at a cool radio station, hosted a public access TV show, wrote zines, became a vegan, lost 100 lbs in a year, and saw the world. As a result of a healthy, balanced diet and exercise, I eventually got down to around 220 pounds, which a healthy weight for a 6’2? man.

For all the improvements of my physique, there is still much emotional and psychological healing and deprogramming which needs to happen. I’ve previously written about my struggles with male body dysmorphia. Sometimes I don’t like my body, and to this day, when I’m exercising and feel like quitting—which is every time, thanks, Crossfit—I tell myself, “You’re becoming Batman.” When I’m flipping tires doing box jumps, my mantra is: “Don’t give up, you’re almost Batman.”

It’s the truth, and I’m not embarrassed about it. I am a grown man who is an Iraq veteran and the father of three daughters, and I am still carrying around a desire to be Batman.

Batman is a billionaire and a ninja. He is a high-stakes international finance cowboy and a detective. Foolishly, my mind tells me I could possibly have the same physical build as him—and perhaps more importantly, I should have the body of Batman.

But Batman is also a fictional character. He was created by a young man barely out of his teens during the Great Depression to take people’s minds off of their terrible realities.

I lost the idea of what real, vulnerable, human males are supposed to look like in a sea of airbrushed, waxed abs. Perhaps more correctly, I don’t think I’ve ever known. I still occasionally mistake muscularity as the sole manifestation of masculinity. In doing so, I have done a great disservice to myself. I have developed baggage which I will pass to on my children if I am not cognizant and engaged.

Comics haven’t exclusively been staple-bound, psyche-crushing, unrealistically Sisyphean aspirational deities for me; there has also been a great deal of benefit.

I learned much of story pacing and prose economy from the works of Alan Moore and Will Eisner. I picked up a great deal of Yiddish, whose delightful idioms and rhythm I was not exposed to growing up in an Asian household in Hawaii. Calvin & Hobbes made me swear I would never let myself become detached from my imagination. The fantastic MAUS series kindled my interest in World War II, the Holocaust, and human rights activism. Usagi Yojimbo introduced me to Japanese mythology and the concept of Bushido.

My body is not rippled and glistening like the Spartans of 300, and perhaps the closest I’ll ever get to looking like Batman is passing for Christian Bale in American Hustle.

I accept this as a fact. I’m okay with not needing a secret identity to oppose evil. I can take a stand against sexual assault and work to relieve homelessness now. I can be the best husband and father possible. I can be kind and generous. I can work hard at my job, giving my best every day.

Superheroes are better than me, but if this is as close to super as I can get, I’ll gladly take it.

David Guba is originally from Hawai’i, and lives in Virginia with his wife and three daughters. In addition to blogging at A Bareknuckled Affair, he is a Brazilian Jiu Jitsu practitioner, a vintage motorcycle enthusiast, a terrible skateboarder, and a very good cook. Connect with David on Facebook,  Google+,  and Twitter. This article was originally featured on the Good Men Project and reposted with permission.