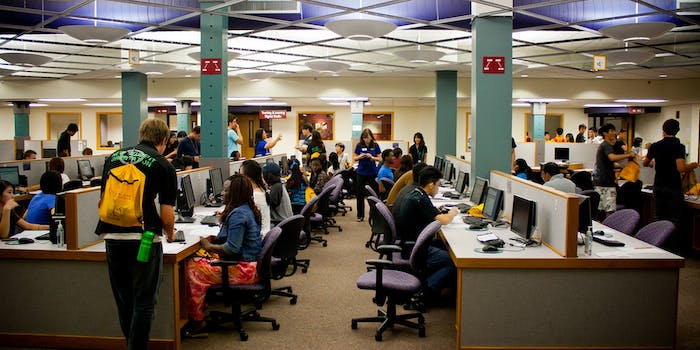 It's faster and has a longer range than standard wireless networks.

Good news for college students who compulsively check Tumblr during Abnormal Psych lectures, or binge-watch “Scandal” on Netflix instead of writing their theses: Procrastinating on the Internet is about to become easier (and faster) than ever.

In a statement released yesterday, wireless provider Declaration Networks said it will be debuting “Super Wi-Fi” a new kind of super-duper high-speed wireless broadband, at more than 500 colleges and universities across the U.S.

West Virginia University, which launched its Super Wi-Fi program last July, is the first higher education institution in the nation to implement the service. A spokesperson for Declaration Networks also said that non-student residents of college towns enrolled in the program are welcome to sign up for the service.

The initiative is part of a larger effort spearheaded by AIR.U (Advance Internet Regions), a consortium of private companies, higher ed institutions, and non-profits that aim to provide rural or underserved campus communities with high-speed Internet access. Using “white spaces,” or unused frequencies between TV channels, Super Wi-Fi offers a wider range of broadband service than most wireless services, because the signals can move further using less energy.

Because TV airwaves are fairly crowded in U.S. urban markets, white spaces are probably better suited for rural or underserved areas, which makes Super Wi-Fi a good fit for rural college campuses like WVU. A spokesperson for Declaration Networks said that Super Wi-Fi requires no additional equipment for us and can yield a range of up to five miles, compared to the 350 feet offered by most conventional Wi-Fi services.

Although Super Wi-Fi is relatively new, the service is gaining momentum across the globe: the first public Super Wi-Fi network in the US was launched in Wilmington, Del., last year, and a Singapore park recently launched a Super Wi-Fi trial, which may precede the city rolling out a free public version of the service within the next few years. Whether Super Wi-Fi is set to revolutionize the future of wireless networking remains to be seen, but for now, it’s certainly set to revolutionize thousands of college students’ online procrastination routines.