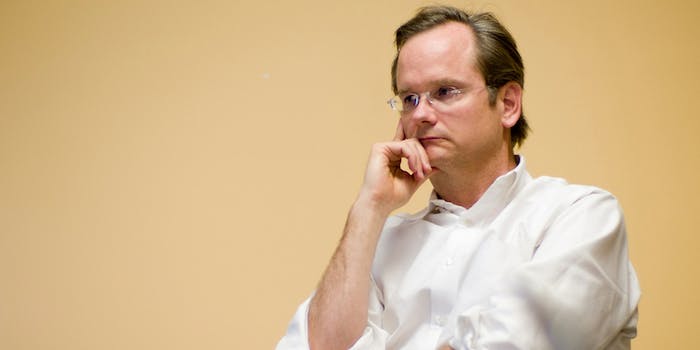 Mayday PAC has another $4.5 million to raise between now and July 4.

A crowdfunded assault on the proliferation of super PACs has successfully completed its first round of funding, raising more than $2 million.

Now, Mayday PAC, the brainchild of Harvard law professor Lawrence Lessig, is looking to raise an even more impressive sum—$5 million in 30 days.

“On May 1, we set a goal of raising $1 million dollars from grassroots donors in 30 days,” Lessig said in a recent YouTube message. “No one thought it could be done. But we did it in just 13 days, with almost 13,000 contributors and a median contribution of just $50.”

In addition to million dollars in crowdfunding money, Lessig has also secured another $1 million in matching funds from individual donors. Starting on June 4, the political action committee officially began its next round of fundraising, hoping to collect an additional $5 million in small donations from grassroots donors by Independence Day. So far, they’ve gather little more than half a million.

If this next fundraising goal can be met, Lessig then plans to begin Mayday’s actual mission: the funding of candidates during the 2014 midterms who oppose super PACs as a means of political campaign financing.

Lessig, who’s been a vocal critic of money in politics for years, wants to essentially fight fire with fire, using the same tool that wealthy donors and corporations used to fill the pockets of favored political candidates to advance politicians who will attempt to close this very same loophole.

For those unaware, political action committees are non-profit groups that raise money for a particular candidates or cause. These groups have been around for decades, spurred by the placement of limitations on the amount of money that could given to a particular candidate. However, the 2010 Supreme Court ruling in the case of Citizens United v. Federal Election Commission cleared the way for the creation of super Pacs. Super PACs allow contributors to make unlimited donations, so long as the super PAC doesn’t coordinate with a particular candidate (a loosely followed rule).

Super PACs have primarily benefited ultra-wealthy donors, Lessig argues. But he believes that by pooling moderate donations from a vast group of individuals, it’s possible for the Mayday PAC to exert the same kind of political influence.

As with the first round of funding, Lessig plans to secure $5 million in matching donations for this round, so that his PAC will have $12 million by July 4. If his PAC fails to meet its fundraising goal, the money will be refunded.

“We only keep the funds you pledge if we hit our goals,” Mayday states on its site. “Unless there’s enough to make a difference, you don’t pay.”