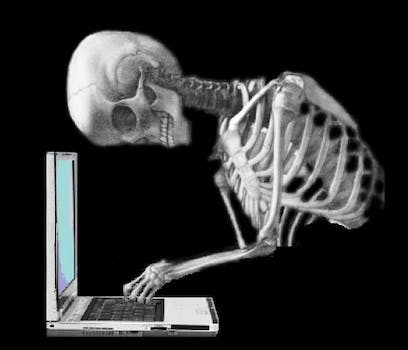 A fake obituary notice on MetaFilter caused grief and frustration on the 13-year-old forum.

Maybe our parents were right to tell us to be wary of strangers on the Internet. The relationships you form in forums seem genuine—until one prankster breaks everyone’s trust.

That’s what happened to MetaFilter on Tuesday, when a suicide hoax shook the community to its core.

MetaFilter, a 13-year-old forum, has a reputation for being a place “remarkably free of trolls, griefers and other anonymous jerks,” according to Time magazine. Or at least it used to.

Moderators were recently contacted by a person claiming to be user holdkris99’s wife. She wanted to post a notice on the site about her husband’s suicide. Moderators helped her set up an account—mrs holdkris99, now disabled—and showed her how to do so.

The obituary notice may have been fake, but it elicited hundreds of comments from people truly in grief.

“I tried to read your amazingly well fit tribute four times earlier at work and just couldn’t make it through for crying too hard; I still can’t find the words I need, but at least I’m only bawling at home,” user vers wrote.

In hindsight, moderator cortex wrote there were a few suspicious things about the suicide. There were no readily findable death notices or condolences on social media pages. But it wasn’t until a friend posted an online reference to hanging out with holdkris99 days after his death that moderators became suspicious.

The jig was up. She replied that the whole thing was a “bad experiment or joke or whatever carried too far.” Moderators promptly banned both accounts. Cortex wrote:

“We don’t really care about the specifics of Marc or his wife’s motivations or what they have to say about any of this. They’ve thoroughly burnt their bridges, and while it’s just amazingly lousy for him or them to have done this, their involvement with this basically ends with the truth being outed here and them being no longer welcome on Metafilter.”

The MetaFilter community has grieved over several actual deaths in its long history, but this is the first “pseudocide” members can remember. Members will no doubt become more skeptical for the experience, but hopefully not to Reddit-like extremes.

“Hooooly shit. I sobbed about this, like seriously, big, sloppy tears. I don’t know if I’m angry–just kind of shaking my head at myself for being so gullible,” wrote PhoBWanKenobi.

“I was momentarily angry, but I think I’m mostly sad, because, you know, there are a lot of people going through a lot of shit, and it’s hard to reach out, and now some of them who do take that really hard step, I won’t believe or I’ll be skeptical about because I was deceived in this fashion,” wrote Eyebrows McGee. “I’ll be a slightly less generous and more cynical person.”