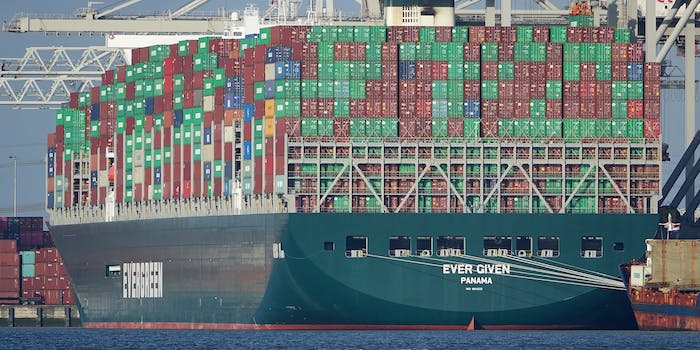 A giant ship got stuck in the Suez Canal, releasing a flood of memes

The Ever Given is causing an unprecedented traffic jam.

In news that feels like it emerged from the 1950s rather than 2021, a massive container ship is currently stuck in the Suez Canal. It’s really wedged in there, creating a traffic jam of other cargo vessels. That’s a serious problem because about 10% of global trade passes through the canal—but it’s also a pretty farcical situation to watch unfold in real time.

The ship itself is the Ever Given, a 1,312-foot container vessel that ran aground in the wee hours of Tuesday morning, blocking the entire width of the canal. To give you a better idea of its size, the Ever Given is significantly longer than the height of the Eiffel Tower.

Photos from the scene are striking:

The ship’s predicament began to trend on Twitter thanks to a viral thread from disinformation researcher John Scott-Railton. His tweets do a good job of explaining the simple-yet-complicated nature of the problem. Simple because it’s literally just a big ship stuck in the mud. Complicated because hundreds of lucrative cargo vessels are now trapped as well, causing an untold impact on the world economy. The Suez Canal is the only way to sail from the Mediterranean to the Red Sea without going literally all the way around Africa. And all these container ships are stuck until the Ever Given gets moving.

You can see the scale of the problem on the tracking website Vessel Finder. It shows the Ever Given near the south end of the narrow Suez Canal, with dozens of ships now gathering in the Gulf of Suez (i.e. the top of the Red Sea) with nowhere to go. There’s a similar issue at the north end of the canal as well.

According to the BBC, the Suez Canal Authority is attempting to move the ship using tug boats, but it could be days before the Ever Given is afloat again. The operation may involve digging tons of sand from around the ship and removing some of its cargo to help it float.

In the meantime, spectators are shitposting their way through the debacle.

As a chaotic postscript to this ongoing saga, the Ever Given seemingly drew a giant penis in the Gulf of Suez before running aground. Sure, why not!