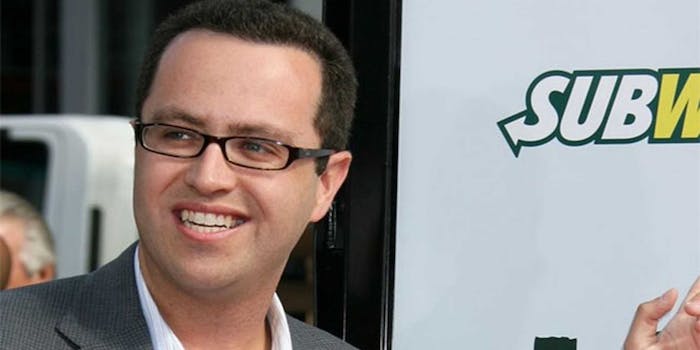 Subway Jared and the case of the abusive ‘nice guy’

The abusive boy next door.

His name is Jared.

Fifteen years ago, Americans welcomed the Indianapolis native into their homes and hearts, inspired by his story of dropping nearly 250 pounds on the “Subway diet.” The 20-something college graduate became the quintessential boy next door—an affable, bespectacled, young charmer. As the official Subway pitchman, he maintained the wholesome, unassuming, innocent, and even shy air that embodied his persona—one aligned with healthy choices and such neighborly familiarity that we only needed to know his first name.

As U.S. Attorney Josh Minkler said during a press conference, “This is about using, wealth, status, and secrecy to illegally exploit children.” Indeed, and Fogle’s case is indicative of a much larger social problem—the verbal, emotional, and sexual abuse that often comes from the men who intentionally exploit their universal regard as “nice guys.”

Writing at Everyday Feminism, Erin Tatum distinguishes the difference between a guy who is actually nice (albeit a bit misguided) and one who uses a “nice guy” image to deceive and violate women for their own exploits. “There are a lot of really wonderful, well-intentioned men who have a difficult time understanding the difference between being nice to women and being an ally to women and women’s causes,” Tatum notes. “Then there are other men who pretend to be nice in order to validate their manipulation of women for sex and romance.”

“Then there are other men who pretend to be nice in order to validate their manipulation of women for sex and romance.”

It’s a pattern often memeified on Reddit, Twitter, and various other online communities. As Heben Nigatu noted at BuzzFeed, “nice guys” troll the Internet and popular culture, with a glaring lack of awareness about their hypocrisy. The now-defunct “Nice Guys of OkCupid” Tumblr page highlighted the many inconsistencies between the written profiles of self-described “nice guys” and how they answered questions in the matching function—or worse, their back-and-forth messages with women.

One image Nigatu curated from the page shows one guy wrote on his profile, “Starting to think most of the girls on here are looking for attention…you’re all saying you want ‘a nice guy for once.’” He continued, “Sick of girls saying they want a nice guy, but completely ignoring the nice guys when they are right here.” But then came his answer to the following match question: “Do you feel there are any circumstances in which a person is obligated to have sex with you?” His answer: Yes.

Any guy who is actually “nice”—let alone a decent human being—would understand that consent for sexual activity must be enthusiastically and willfully given, not taken away from another person. No person, regardless of gender, and certainly not any woman, is under any obligation to perform any sexual act for another person, simply because the person who wants it is a “nice guy.”

Whereas men who suffer from “nice guy syndrome” believe they’re entitled to romantic and sexual regard because of their status as a so-called friend to women, Fogle’s case takes a different, much uglier twist. Fogle apparently didn’t direct his abusive “nice guy” tactics on other adult women, where a gendered power dynamic is relatively mitigated by the fact that he’d be interacting with counterparts of a similar age. Instead, he applied them to young, teenage girls, who were solicited for sexual activity at an age where they are still developing their own sense of self, let alone their sexuality. Legally, and socially, that kind of manipulation from an adult can be described in one word: rape.

Whereas men who suffer from “nice guy syndrome” believe they’re entitled to romantic and sexual regard because of their status as a so-called friend to women, Fogle’s case takes a different, much uglier twist.

It’s a disturbing abuse of power and status that’s often a common denominator in cases like Fogle’s. Just four years ago, an investigation revealed that now-disgraced Penn State football coach Jerry Sandusky used his status as a public figure, mentor, and philanthropist to sexually abuse adolescent boys—via his position with a non-profit charity. And as the Daily Dot’s Nico Lang highlights from the Bill Cosby cases, which all involved adult women, his “nice guy” status was a go-to defense for people who refused to believe America’s Dad could’ve possibly raped more than three dozen women.

Based on reports, Fogle allegedly interacted with so-called johns to solicit underage minors for sex. But what’s missing from the conversation—and the terminology being used—is that the young girls he preyed upon were indeed subject to an oppressive power dynamic. There’s a difference in an adult woman legally and willfully engaging in sex work, without being forced to do so, and a 14-year-old being put in bed for sex with an adult male. The distinction rests in an ongoing problem with human trafficking worldwide, including in the United States.

As Tim Swarens notes in a column for the Indianapolis Star, a 2014 United Nations report on human trafficking found that child trafficking in on the rise, with children making up “one-third of all trafficking victims, and that girls are twice as likely as boys to be sold. In most cases, they are sold for sex.” Even further, as Swarens highlights, the availability of online child pornography has sharply increased. “In 2011, then U.S. Attorney Eric Holder reported ‘a historic rise in the distribution of child pornography, in the number of images being shared online, and in the level of violence associated with child exploitation and sexual abuse crimes. Tragically, the only place we’ve seen a decrease is in the age of victims,” Swarens writes.

Fogle didn’t “pay for sex” with underage girls. He raped them, aided and abetted by child abusers who eagerly took the money—profits stemming from Fogle’s pristine spokesperson image. And Fogle likely believed he could get away with it, because his affable public persona would shield him from any criticism. He thought of himself, as many Americans did, as a “nice guy.”