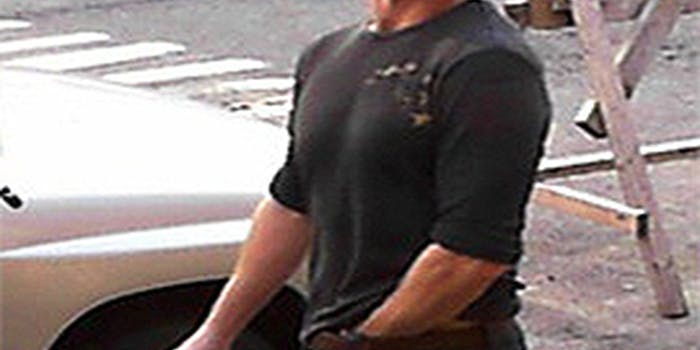 Styleblaster snaps pics of unsuspecting Brooklyn residents and asks the Internet to rate their outfits.

At what point do style blogs and on-the-street gawker sites go too far?  Brand new Williamsburg mockery site Styleblaster may just find out.

Featuring a hidden camera set up on the most prominent street of New York’s most infamous hipster community, the site takes pictures of Brooklynites in real time as they walk down Bedford Ave. Then it uploads them and allows users to “click the top hat if they’re stylin’!”

The site says its aim is to critique the notorious gentrification of the area—the invading artists and bikers have long clashed with the community’s traditional Jewish residents—and capture “Williamsburg on the hoof.”

Unlike a typical streetstyle blog, Styleblaster documents all — the visiting fashion plates, the hipsters and have-nots, the native Polish and Italian proud who have for years called this neighborhood home. And above all—the dapper salarymen and businesswomen who stand to inherit the area.

On-the-street fashion sites are used to raising eyebrows. Take People of Wal-Mart, which purports to mock the fashions of shoppers at America’s most popular retailer. The site has long been criticized not only for its invasions of privacy, but for being classist as well as sizist, since many of the people who wind up on its pages are working class people without recourse to major fashion outlets or typical department-store sizes.

Then there are the truly creepy, bizarre watch sites, such as Black Out Korea, which documents the large number of Seoul residents who simply pass out on the street after long days.  Or Baltimore-area Tumblr That Guy’s On Heroin, which documents the erratic behaviors of the people it calls “zombies.”

This isn’t even the first time Williamsburg has been the subject of a fashion watch blog; given the popularity of hipster-mocking sites like Look at This Fuckin Hipster and Dads are the Original Hipsters, it was probably only a matter of time before someone made Halloween or Wiliamsburg?, a site devoted to lampooning the elaborate everyday costumes worn by Williamsburg residents.

It’s difficult to ignore the themes of class and race that emerge among all of these sites, each of which relies on user submissions. Styleblaster, however, is theoretically setting itself up to document a place and a culture rather than rely on the subjective whims of observers to photograph the most outlandish and bizarre of Williamsburg’s inhabitants.

But is it ethical?

It’s clear that none of the subjects of the photos are aware they’re being photographed. In essence, the Styleblaster camera works as a real-time webcam that the user can pause, ogle, and comment on via the voting system.  And while other websites put their victims at the mercy of individuals with cameras, Styleblaster is betting on its well-known vantage point to catch on quickly and send people parading by on purpose: “It will quickly become a destination for New York City peacocks to traipse by and show off what makes the neighborhood hop.”

Still, that dawning awareness on the part of Williamsburg’s oblivious residents can’t come fast enough. We’ve already been treated to things we wish we could unsee.