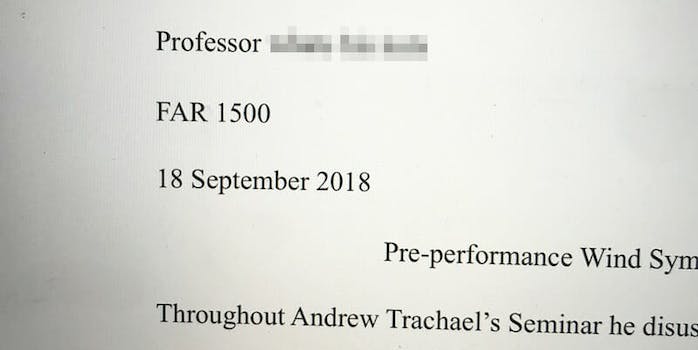 Student turns in paper with a huge, hilarious mistake

Going away to college is a daunting step for most young people. They’re away from home for the first time, getting used to dorm life and a new roommate, and learning how to navigate campus. It’s a lot to take on! So it was understandable when Zoey Oxley, a freshman at Ohio University, totally blanked on her professor’s name when turning in a paper on Tuesday.

The only problem was Oxley’s creative placeholder while she composed her paper, which she forgot to swap out before submitting it.

Oxley later told BuzzFeed News that she’s always been really bad with names. “So, when I was writing the paper, I blanked on the professor’s name and filled it in with ‘Professor whats his nuts,’ just as a placeholder,” she said.

She tried to resubmit the paper with the professor’s name, but she wasn’t able to. Understandably mortified, Oxley frantically emailed her professor.

“I am writing this email very embarrassingly,” she wrote in the email. “As I began writing my paper, I wrote out the template. Unfortunately I could not remember your name, so I filled it with something completely unprofessional.”

“I hope this does not reflect what you think of me and that the next assignment I can address by the correct name,” she concluded, adding again that she was terribly sorry about the mistake.

Thankfully her professor, first-year MFA student teacher John Hendel, had a good sense of humor about it, even changing his Twitter handle to “Professor what’s his nuts.”

At first, he skimmed her email and didn’t think much of it. The following day when he was grading papers, he quickly understood the reason for her embarrassment.

When Oxley saw Hendel’s tweet, she posted her own version. Both tweets subsequently went viral.

A series of unfortunate events: pic.twitter.com/xSnT0JTYPV

As people began retweeting Oxley, they cringed along with her.

I would have flung myself off a bridge https://t.co/tiQCYXJgbU

I'VE BEEN CACKLING IN MY ROOM FOR THE LAST FIVE MINUTES https://t.co/6E4jm2DLeI

Others let her know that she wasn’t alone:

This is like the one time i submitted a paper and the document was titled "shit ass philosophy paper" https://t.co/iXXFqJKOgT

A partner in a law firm I worked at received a letter with the salutation "Dear Asshole."

Of course, it could not have been more accurate. https://t.co/Ew9twavill

I did this with a paper title in college. pulled an all nighter, put together the differenthe section's in a file titled "Prof_X_Stupid_Boring_Class_Assignment_Complete.Doc"

Forgot to change it. https://t.co/zcHV7dDJ82

One time I turned in a document titled "Fuck this class in the ass" https://t.co/5Se3ZodABj

This is hilarious. Zoey, it’s okay! These things happen and professors have absolutely seen worse. https://t.co/mft8rd9Bix

Oxley hasn’t had class with Hendel since their respective tweets went viral and said that she honestly doesn’t know if she’s dreading or looking forward to facing him. For his part, Hendel said he’s “basically going to act like nothing happened.”

Given all the attention they’ve gotten, we wish them best of luck with that!