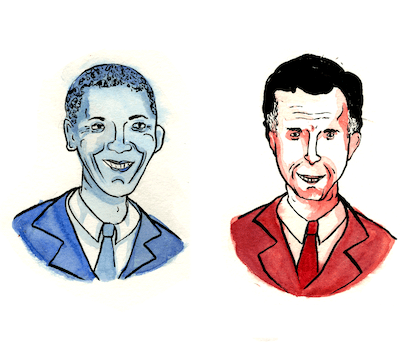 Rebecca Tobin, a British foreign exchange student, channeled her thoughts on the presidential ballot via a wicked GIF animation.

While millions of Americans wait in line to cast their vote for the next president of the United States, college student Rebecca Tobin will not be—and not because of any of the reasons listed on YourExcuseSucks.com.

Tobin, 20, is a study abroad student from England. And while she’s been following the election season closely, the fact that can’t vote inspired her to vent her frustration through the following GIF of a possessed-looking Mitt Romney.

“I wanted to somehow put out my views on the whole thing,” Tobin told the Daily Dot. “No, I’m not a fan of Romney! I dislike a lot of his policies, especially when it comes to social and health issues like abortion; the choice for me would be obvious.

“Living in a college town in the south, it’s easy enough to convince yourself that the world is voting Obama until you drive half an hour away; plenty of Romney signs along the highway! It was exciting but also pretty scary to realize that Romney actually has a chance of getting into the Whitehouse.”

It took Tobin a few hours to create the animation, using a mix of Photoshop and watercolor painting. She posted it to Tumblr early Tuesday, where it has collected more than 300 notes and been highlighted by the the coveted GIF tag.

Tobin is currently studying classic literature at the University of North Carolina where her campus has been buzzing with election news.

“I had to walk past the early polling station every day and was always asked if I had voted, it was horrible to have to say no!” she added. “Part of me knows that I really have no right as I’m not American, but all the same it’s still frustrating.”