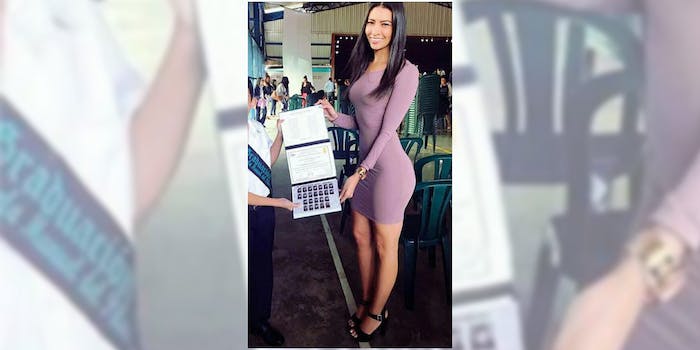 Did this dad really photograph an attractive teacher instead of his kid’s graduation?

The diploma is real, but is the woman handing it out?

A picture of a student receiving a diploma has been popping up all over the internet, but people are questioning its authenticity. The photo shows only half of the young boy, the joke being that the photographer, supposedly the father, chose to concentrate instead on the surprisingly proportioned teacher handing out the certificate.

Photo taken by a proud father-of his son receiving his diploma from his teacher…..

The picture is showing up everywhere from Reddit to Twitter, often in Spanish, but also in Russian and English. Many of the Twitter accounts showing the photo also seem to be pornographic in nature so be careful if you want to click through to see what else they are posting.

Although many posters claim the boy in the picture to be their own son or nephew, the photo’s actual origins are unknown. Also many feel the image has been photoshopped, and they point especially to the back forearm, which seems to be oddly floating in space, unattached to the woman’s body.

And also her wrist in the foreground, which is about an inch in diameter.

We may never know the source of the mysterious photo, or why someone chose to photoshop it, but it’s pretty clear some kid graduated from something at some point, and that kid deserves some credit. Way to go little guy, sorry everyone seems to have forgotten about you.