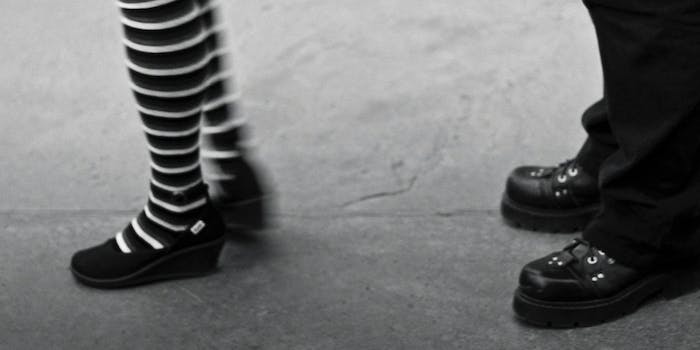 10 things you need to know about #StreetHarassment

This week, Hollaback hosted a tweetup to discuss #streetharassment.

This week on Twitter, Hollaback (an organization dedicated to ending street harassment) hosted a Tweetup using the hashtag #harassmentis. The topic of harassment has spurred a number of vibrant and illuminating hashtags in the past year, #fasttailedgirls and #shoutingback among two of the most notable. Today’s panel brought together a diverse group of activists to talk about the role race plays, everyone’s race—harassers and harassed alike—in street harassment.

Most people still don’t think or talk about street harassment, either their experiences as adults, or to their children. And many think that street harassment, which can include a wide range of behaviors ranging from racist, vulgar comments to actual physical assault that can end in tragedy, is just the price of walking around in public, for everyone equally. But harassment is a global issue—it doesn’t affect everyone equally, and it is a serious problem that undermines equality in the public sphere.

Until women are able to move freely without the ubiquitous threat of gendered violence in public space, we cannot engage fully in public life. This is true offline and on. It’s part of a near universal safety gap. To understand street harassment you really have to put it in the context of how violence against women, members of the LGTBQ community, and people of color is institutionalized and broadly expressed. It is the normalization of gendered violence that manifests, on our streets every day, racist, sexist status quo ideas about rights, hierarchy and power.

1) Harassment is infused with dominant ideas about race, gender, sexuality and power and how those ideas relate to the identities of the harassed and the harassing.

Sometimes harassment perpetuates male dominance within racial groupings, something that strengthens racism. The darker a woman is, the more inextricably racism and sexism combined in her harassment. In countries where racial demographics are reversed, racism is used in similar ways to reinforce male dominance. The role that harassment plays in the regulation of people in public space is inseparable from the long-tail effects of colonialism (yes, including in the U.S. where we teach kids about colonialists but never really as colonizers) and the realty of patriarchal norms. These are not academic abstractions or something past. People are experiencing these interactions every day.

2) Portrayals of harassment in US media are informed by stereotypes that incorporate historical representations of race, bodies and power.

Mainstream press rarely covers harassment as a legitimate concern, or as a societal problem, and when they do it is written about as a problem “over there.“

3) Harassment is expensive and inhibiting.

We take cabs, we join gyms, we go out of our way, avoid activities, and travel inefficiently to avoid being harassed. In any case we’re often blamed for, or expected to politely endure, our harassment.

This is also an expression of patriarchal dominance. Members of the LGTBQ community experience higher rates of harassment and violence in public because they are so visibly non-conforming.

5) Harassment is often not only ignored and tolerated by the police and people with authority to confront it, but often involves them.

Additionally, the idea of confronting harassment by criminalizing it is untenable given how institutionalized racism is in our police and judicial systems.

6) Harassment is a global problem for girls and women.

While men, particularly gay and transgender men are targeted in high proportions, it is usually by other men. Girls and women are generally not harassing people, grabbing their bodies or otherwise threatening them in public—muttering obscenities, making pornographic suggestions, touching people they don’t know in intimate ways, lurking on stoops, staring from benches, and following girls in cars.

Everyday Sexism’s Twitter feed is a litany of hundreds of incidents a day, some in real time. However, we all experience harassment differently because of the ways that race, class, ability, and sexuality intersect. I understand why many people don’t like universalist arguments based on gender because we cannot modularize these parts of our identities. It’s not that harassment might be racialized, it’s that by it’s very nature it is racialized. The same mechanism that informs sexism, informs racism, homophobia, transphobia and more. They are mutually dependent ways of oppressing people.

All I can say is that, based on my own experiences, regardless of who was doing the harassing—no matter what the age, race, class and other components of the interaction were—gendered intimidation and violence employing ideas about race, class and sexuality was the intent. The dynamics of my identity are fluid and change depending on context. It’s hugely unsettling sometimes. What is important in the U.S. becomes entirely unimportant in, say, Morocco. Some places I’m “white,” others I’m not. In some places class matters, in others it’s subsumed by race and caste. I’ve lived in four very different countries on three continents and travelled extensively to others where harassment, divorced from the issue of race entirely, is so woven into the fabric of life that it’s a miracle girls and women ever leave their homes.

Which is the point.

One thing has remained constant: My harassment, something that started in a racialized way when I was 9 and continues today, has always been used to reinforce male power in public space. This is not to question the experiences of women for whom this is not the case, just to explain my own. The clearest incident I remember that might illustrate this was one when I was not alone but walking with my boyfriend. As we walked, a group of men started to harass me. When we both ignored them, they grabbed my boyfriend’s arm from around my back. The men, my boyfriend and I were categorizable by appearance into three racial groups. While I was the target of the harassment, it ultimately had far less to do with me, than with their exercising racialized male dominance.

Anywhere between 80 percent and 98 percent of women surveyed report persistent, aggressive street harassment. A spectrum of street harassment is a universal constant for women and it imparts the understanding that girls and women should not feel too safe or confident in public.

7) Harassment is not flattery and “compliments” don’t scare people or make them uncomfortable.

The use of words that involve consumption is also interesting and telling. Of the more than 50,000 submissions sent to the site Everyday Sexism, a significant percentage involve common the street harassment. Typical submissions look like this: “A guy came up behind me and put his shirt over my head while simultaneously grabbing my breasts, hard,” “Harassed by a group of twenty year olds…shouting ‘Nice rack!'” (to 13-year-old), and “A hand grabbed me from behind and pushed between my legs.” Girls’ and women’s responses range from being intimidated, embarrassed and humiliated to being enraged and fighting back. Most men express amazement that we experience these exchanges regularly.

8) Harassment is something everyone’s silent about.

Even though it is a public issue.

9) Street harassment has nothing to do with what a person is wearing.

Some people think that covering up entirely makes a difference, when it clearly doesn’t.

10) Street harassment gets its power from the threat of violence.

It’s frequently abusive and can be really frightening. The potential for real and lethal violence is real.

Earlier this week, Laura Bates, founder of Everyday Sexism, wrote about her recent experience with street harassment in which the men harassing her thought it was a funny to say, “I’d hold a knife to that.” If you ask most women, even if they haven’t talked about it before, they will probably tell you similar stories or at least stories where they went out of their way to avoid having a similar story.

As I’ve written before, these are common occurrences, and the idea that violence simmers under our public examinations and men’s casual assumptions is never far from the minds of people who live with regular harassment. The problem with street harassment isn’t the demand that a person smile or perform fellatio, the problem is the answer to the question, “What if I refuse?” Going to school, commuting to work, or meeting friends should not have to involve an assessment of whether or not you are putting yourself in a “dangerous situation.” It starts when girls are as young as 9, as was my experience, and never ends.

The younger the person, the more negative the possible effects, which are well documented and can include depression, shame, headaches, anxiety, withdrawal, fear, self-objectification and more. While I’d like to say that girls should be taught as early as possible to confront harassers and to stand up for themselves this is not realistic and is, indeed, for too many seriously bad advice. As Jamie Nesbitt Golden noted last year, “Just telling men ‘no’ doesn’t necessarily work for everyone – and can even be dangerous,” because, like so much else related to violence, this has real class and race implications. Hollaback has written an excellent exploration of these topics in #Harassmentis: Identity and Street Harassment.

The chat closed with some great ways to learn more about how to end street harassment.

Organizations like Hollaback, Stop Street Harassment, The Everyday Sexism Project, and the UN’s Safe Cities Global Initiative conduct and compile research and work to raise public awareness, educate children and adults and give people the tools to deal with and confront widespread harassment. Hollaback now has chapters in 71 cities in 24 countries. Check their websites for great information, calendars, local chapters and allies, and upcoming workshops and evens such as the upcoming HOLLA::Revolution 2014, a conference on street harassment and International Anti Street Harassment Week.

This article was originally featured on Huffington Post Gay Voices and was republished with permission. You can find the original here. Soraya L. Chemaly writes about feminism, gender and culture. Her work appears in The Huffington Post, The Feminist Wire, BitchFlicks, Fem2.0, Alternet and Feministe among other media.