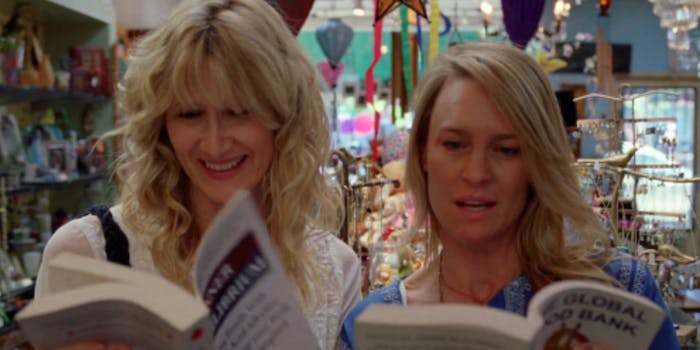 Streaming TV Party: Amy can’t get a read in this week’s ‘Enlightened’

On this week's 'Enlightened' watch, Amy tries to understand women.

‘There are times I just burn with hate‘

This week’s Enlightened watch spans two episodes about Amy’s relationship with women. Episode 5 marks the halfway point of season 1, though no major plot shifts have taken place so far, and that is somewhat… refreshing? We’ve watched Amy set her next good deed (applying at the homeless shelter, throwing Levi’s drugs in a river) only to be besieged by herself. Two steps forward, one step back.

In “Not Good Enough Mothers,” directed by Nicole Holofcener, Amy lunges into her next good deed: Helping a mother facing deportation. Her plight, which she only knows about because of the news, stirs something in Amy. But, this being Amy, she also makes it about herself.

I really wanted to see more come of the Women’s Association of Abaddon (WAA). Amy sees Krista’s baby shower as a step toward reconciliation but does not read the room and turns it into a platform for her women’s group pitch. Her misreading of women around her—Helen, Krista, Judy—shows why the group is DOA. Amy wants solidarity but hasn’t done the groundwork. Her misreading continues in “Sandy,” directed by Jonathan Demme. It gives us some insight into Amy’s experience at Open Air, and Robin Wright is perfectly cast as Sandy, a beachy blonde mirror for an increasingly isolated Amy. We quickly see just how deep their shared experience is.

There are a million masks to choose from these days. Sure, yours might be stylish––but it is really protecting you from COVID-19? Find out how safe you really are with our comprehensive mask guide.

You can also use code DAILYDOT to get 20% off a pack of America-made, FDA-registered surgical masks from Armbrust American.

I tried to find Helen reaction GIFs, and there are not enough!

Diane Ladd is so great here, even though we haven’t seen her interact with anyone outside her home. “Sandy” brings the horror of the houseguest to her, and provides some great moments: Helen subtly putting her hand over her cup when she first meets Sandy, as if she’ll be drugged; her startled look when she hears Sandy and Amy doing yoga.

It’s also been interesting to see how Amy has regressed at her mom’s house, turning into the pouty teen who doesn’t understand why she can’t borrow the car, or why her best friend can’t sleep over another night. In one of the most illuminating moments of the episode (and, perhaps, the show so far), Helen casually recalls a pattern: “You’d get a fix on a girl, and then you’d have a falling out, and all the tears. Then, a new girl would show up. And she was your best friend. So involved.”

If you love the idea of cramming your month full of scares, let us save you the trouble of scrolling your library until your eyeballs fall out. We’ll recommend an excellent film that fits the bill in every edition of the Internet Insider this month, so grab your popcorn, dim the lights, and stay tuned. Today’s recommendation, now streaming on Amazon:

Amy is churning out the secondhand embarrassment in these episodes. Perhaps it’s a reaction to her passion projects not panning out, but there’s a lot more external stimulation this week. I was reminded of critic Emily Nussbaum’s “hummingbird theory,” coined in 2013 to refer to TV characters like Amy and Leslie Knope. They are intense and well-intentioned but also make people anxious. You might try to avoid the hummingbird, but she’ll find you and get you to join her women’s group. Nussbaum said the archetype “suggests a new concept when it comes to female television characters, something about escaping the trap of perky likability, about finding a new way to forge links between heroism and femininity.”

Seven years later, the antiheroine has flourished on TV—Fleabag, Dead to Me, Sharp Objects, High Fidelity—but there are still traces of the hummingbird. Maya from PEN15 might be a new take on it.

Since episodes are only 30 minutes, I did feel the urge this week to just keep watching all of season 1. But I guess that’s a good sign. Enlightened measures out Amy’s progress in a way that, while realistic, also requires patience. I got irrationally angry this week about something that, in hindsight, was just a blip. In that moment of propulsion, when the nuclear option seemed like the only one, I visualized Amy’s “Let it go.” It’s certainly cheaper than therapy.

For next week: Watch the next two episodes, “Lonely Ghosts” and “Comrades Unite!”