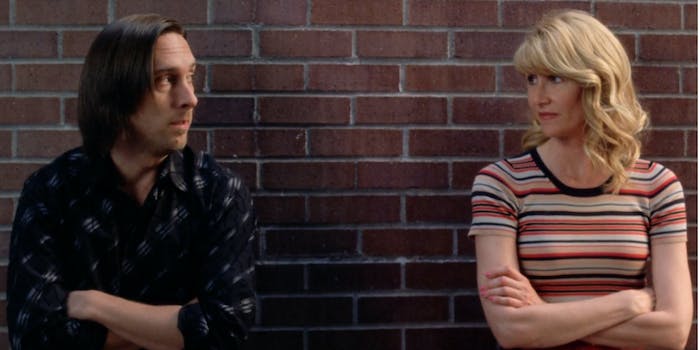 This is the moment we’ve all been waiting for: Amy’s joined Twitter.

We’re used to shows referencing social media and texts now, even making them part of the show’s format. But “Follow Me” takes us back to Twitter circa 2013, when Amy’s first three follows are PETA, Amnesty International, and Mia Farrow. In a way, Amy is a human embodiment of “tweeting through it.”

It was a simpler time, but so much of “Follow Me” feels like a warning. Amy is initially hesitant about joining, wary of what staring at screens is doing to us. But she quickly gets sucked in, gushing about Flender being the “angel sent to you from another world” after he tells her that on Twitter, “You can speak truth to power.”

In this episode, we finally see Amy meeting the kind of people she thinks can help her. The “intellectual” party hosted by Laurie David allows her to network, but it also shows that Amy, for all her posturing about change and helping the little people, is intoxicated by the “new world” she’s stepped into, filled with the kind of people who congratulate each other for being “so brave” while being served wine and catered food. Guest of honor Roberta Jackson’s speech is even more ominous, in hindsight: She talks about “soldiers in a global army” who can be dispatched for good and states without irony that, “We can now defeat tyranny in the virtual space. The cyber revolution.”

Twitter wasn’t exactly new in 2013, but as a document of how people viewed it just seven years ago, the disconnect is jarring. Those “soldiers” weren’t used solely for good. We didn’t defeat tyranny. In fact, we might have become more complacent because of Twitter. This episode felt like the closest Enlightened has come to a social thriller––the shot of her looking at Twitter on her BlackBerry was basically a jumpscare! Plus, she’s walking around asking people in person if they’re on Twitter. The horror.

It’s a good thing that masks are more common out in the wild these days––after all, they do protect us from nasty COVID germs. But now that we’re in this for the long haul you might want to learn more about the mask you’re wearing. Not all masks are alike, and the last thing you want is to think you’re protecting yourself and end up sick.

Of course, I assumed Jeff and Amy might become romantically involved, which would complicate her mission, but “Follow Me” gave us some big red flags.

The first is his unsolicited kiss after the party, which follows him answering the door shirtless in “The Key.” The two people (one played by Enlightened director Miguel Arteta) who approach them at the restaurant to gush about his work kind of seem like plants? When Amy calls him to tell him Dougie’s on board, he brushes her off because his story has been picked up by the Huffington Post, and he’s too busy looking at his Twitter mentions––and he’s wearing a “John Kerry for President” shirt. In 2013.

I know Amy can be a little naive, but working in media for close to 20 years has made me hyper-aware of the self-involved media man, and Mulroney does a great job personifying that guy. He likes that Amy’s paying attention to him, but do we really think he genuinely wants to help her? Or is he just looking to get laid?

Why is action hero fashion so boring? This week’s Behind the Seams looks into the genre to find out why all these guys wear the same shirt––and which action franchises do fashion right.

‘God is a beer on the beach’

A mashup of “Consider Helen” and “The Weekend,” “Higher Power” is devoted to Levi and how he’s adapting to rehab. It ties into the show’s overarching theme of people learning to be good but also letting go of anger and selfishness. Levi’s addiction borders on fatalism.

But Wilson’s performance has subtly become one of the show’s grounding forces; while Amy’s head is in the clouds, Levi, despite his flaws, is more relatable and realistic. There’s also a bit of a crossover event here: In season 2, Enlightened was moved to Sunday nights, where it followed season 2 of Girls. One of the rehab misfits Levi parties with is played by Christopher Abbott, who played Charlie on the show.

Enlightened has only really shown us moments of Levi’s addiction so far, but the scene in the hotel room is heartbreaking in scope and detail––that constant need for more, the feeling of inevitability, the red-eyed self-pity. The sound of Levi’s heartbeat after he does coke, mixed with the sped-up dialogue, made my palms sweat a little, anticipating the inevitable sinking feeling of the comedown. “Higher Power” really conveys that trapped feeling.

Levi’s monologues about trying to find Amy’s turtle were equally heartbreaking, but they also inform what’s happening at Abaddonn. Amy’s searching for something to validate her mission, but it’s not where she expected. So far, all of her “wins” have been accidental. However, there are now three people with poor impulse control and revenge on their minds in the growing Cogentiva revolution. Bringing down Abaddonn isn’t just about what it’s doing to the environment anymore. It’s about the rejects turning the tables.

For next week: Watch the next two episodes, “The Ghost Is Seen” and “All I Ever Wanted.”

“Poor Ireland did not deserve this.”