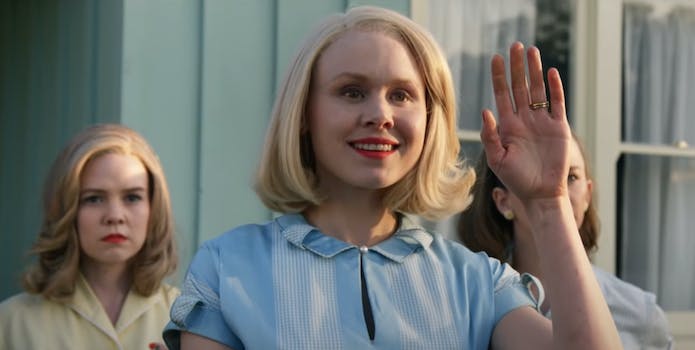 This week in streaming: ‘Shiva Baby,’ ‘Them,’ and more April anxiety

Plus: Reviews of 'Made for Love' and 'Concrete Cowboy.'

Hello! Every week, our internet culture staff discusses the world of streaming entertainment. In this edition:

Last month, when the trailer for Amazon’s new horror anthology series Them was released, it became a trending topic on Twitter. But not just because people were excited.

The series, which debuts on Friday, tracks 10 days in the Emory family’s new life in East Compton, circa 1953, and the first episode makes it clear that they are the only Black family in the neighborhood and their white neighbors are not happy about it. There’s also a supernatural force at work. (In the basement, of course.)

When the trailer came out, Black Twitter said it felt like a “Jordan Peele knockoff” and “both Jordan Peele movies combined.” (He is not involved, though Shahadi Wright Joseph, who appeared in 2019’s Us, stars in this series.) People thought it looked like HBO’s Lovecraft Country, which also explored racism, trauma, and the supernatural in the 1950s. But the bigger criticism was that so many series and films are packaging Black trauma as horror or aesthetic. “These directors, writers and producers love shopping around black trauma for reactions and sales,” said one commenter.

The show is executive produced by Lena Waithe and created by Little Marvin, and while its initial premise is rooted in history—an intro cites the Great Migration, a mass movement of Black families from the American South to other parts of the country—from the very first moment, Them is weighed down by dread, the anticipation that something bad is going to happen. I understand what that pacing is trying to convey, but as a viewing experience, anxiety shouldn’t obliterate character-building and narrative.

As critic Michael Blackmon wrote in his review of Them: “It’s a complicated conversation. Black creatives should be able to express themselves and create fulfilling work, but there should also be consideration for how images of our trauma are essentially a hot commodity right now.”

Them debuts April 9 on Amazon.

Shiva Baby will make you sweat

I recently rewatched the 1994 movie Speed, a thriller which could make even the calmest person feel stressed out. You’re following a group of people riding a bus that has a bomb attached to it; what could be more nerve-wracking? Well, I found the answer to that question when I sat down to watch Emma Seligman’s Shiva Baby. The film, an adaptation of Seligman’s short film of the same name, centers around a college student who navigates interactions with family, as well as current and former lovers, at a shiva. It sounds simple, but a few of the scenes almost prompted a panic attack.

Rachel Sennott is the breakout star in this well-executed 77-minute comedy film, portraying Danielle, a young woman who is still figuring herself out. She is about to graduate college, where she majors in gender studies. She doesn’t know exactly what kind of job she wants. She doesn’t even know who died because she missed the funeral prior to the shiva. It’s tonally similar to the beginning of The Graduate, where Dustin Hoffman is constantly getting asked what he wants to do with his life by his parents’ friends. But the main tension in the film stems from Danielle seeing her sugar daddy, as well as ex-girlfriend, at the same event. Shiva Baby is like a horror film for the socially anxious, and its instrumental score and close-up camera angles put you right in Danielle’s head.

Shiva Baby is now in theaters and available to stream on VOD.

Over the weekend, the New York Times’ Facebook page shared a link to the latest episode of Still Processing, a podcast hosted by Wesley Morris and Jenna Wortham, which delves into Promising Young Woman. The post doesn’t really indicate where Morris and Wortham land on it or what parts they felt the movie got right and wrong; the point of the post is that it’s a tease to the podcast episode, which is available to stream on the New York Times’ website and on podcasting platforms.

“It’s a terrible movie,” wrote Craig R. Brittain, who was among those to comment on the post, from a verified Facebook account. “Look, I was rooting for her—the dialogue is a joke. You could drive a truck through the plot gaps. The ending is poorly written. This movie should win a Razzie, not an Oscar.”