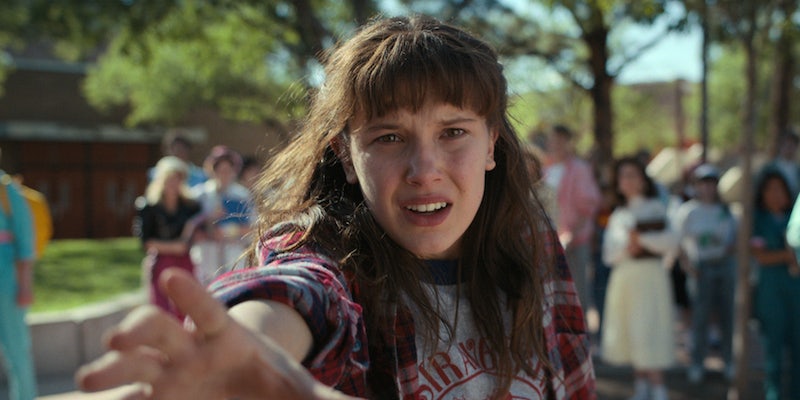 The show adds in some new storylines and characters in season 4 but loses the plot.

It’s certainly curious that Netflix recently singled out The Irishman as the kind of “vanity project” the streamer is attempting to get away from as it continues to bleed money, while the price tag per episode for Stranger Things season 4 was reportedly $30 million.

What did that astronomical sum produce? A bloated seven-episode run (the final two eps come out July 1) that would have functioned much better as a movie.

Release Date: May 27, 2022
Creators: Matt and Ross Duffer
Release: Netflix
The Netflix series returns after three very long years, not quite sure where it’s going.

It’s been three very long years since the last season of Stranger Things, which led to quite a few jokes about how the kids have aged. (The events of season 4 are supposed to take place less than a year later.) That, and the ‘80s fashion that looks a little too modern, make this season feel a little out of step, aesthetically. But right from the first episode, the Duffer brothers ramp up the gore and violence. A warning was added before the first episode, in light of the Uvalde, Texas shooting, but scenes of bloody kids piled in a hallway are jarring nonetheless, and there are other distressing images littered throughout.

There’s more focus on Max (Sadie Sink), who’s grieving the loss of her brother. Kate Bush’s now-viral “Running Up That Hill” is her weapon against gnarled new villain Vecna, who gets a much more fleshed-out backstory than the Mind Flayer or Demogorgon. Vecna offers a look into the story of Victor Creel, who was wrongly imprisoned for killing his family, and deploying Robert Englund in this key role is certainly a bit of fan service, but a welcome one. Stranger Things has never been shy about wearing its horror influences on its sleeve. Creating a new character was a smart move, and Vecna has already become a TikTok icon.

There’s also a deeper look into Eleven’s (Millie Bobby Brown) experiments with memory, and a little more backstory about her time at Hawkins Lab, though even that feels like it takes way too long to unravel.

The biggest issue this season is that there are just too many locations, and therefore too many competing storylines that never quite line up. The USSR subplot is one of the biggest fails; Joyce (Winona Ryder) and Murray (Brett Gelman) take a trip to try to save newly ripped Hopper (David Harbour) from the gulag, but it’s a lot of hurry-up-and-wait. There’s no reason for an episode of this show to run over an hour and be full of mostly exposition.

Season 4’s last two episodes debut in July, ostensibly because Netflix is trying to draw in new subscribers. Stranger Things is one of the streamer’s most coveted titles for a reason, but it’s finally reached the point where it feels like it’s just parodying itself now.