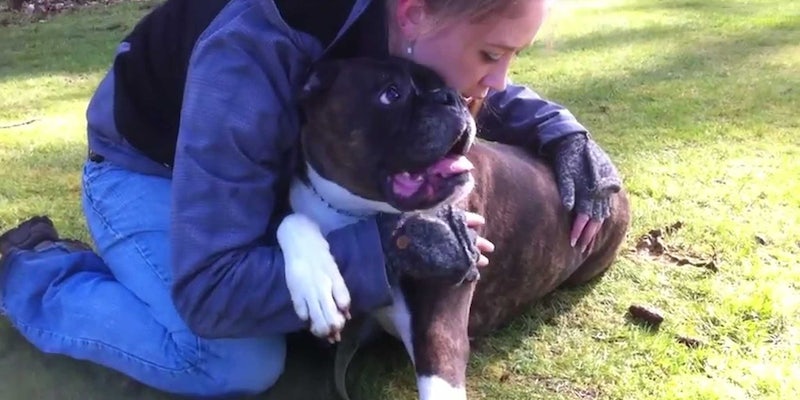 If you haven’t cried yet today, watch a stranger revive a dying dog

We're all too familiar with dogs saving the lives of their owners. This viral video shows the reverse.

We’re all too familiar with dogs saving the lives of their owners. A YouTube video that recently exploded in popularity on Reddit showcased the situation in reverse.

In March 2011, Sugar, a boxer enrolled in a K9 training program in Tacoma, Wash., was undergoing a training exercise when she suddenly fell to the ground. Sugar’s handler became visibly emotional, unsure of what to do in such a situation. That’s when Ron Pace, owner of the center, stepped in. With a few swift moves, he successfully revived Sugar. The look on the dog’s face as it jumped back to its feet—and life—is one of pure relief.

“Ron handed his assistant his Iphone with the video on and said to capture this so a veterinarian can see what happened,” the video’s description read.

It was discovered after the ordeal that Sugar suffered from Cardiomyopathy, a weakening of the heart muscle.

The video was originally posted to YouTube by Pace on March 5, 2011. Since then, it has sparked massive reactions and received over 700,000 views.

“Thank God the dog is fine and that guy is a hero… probably my reaction would be like? her,” user MDthereal said, referring to the overly distraught reaction of Sugar’s trainer.

A copy of the video hit Reddit on July 24, reinvigorating interest in Sugar’s rescue from animal-loving redditors. It received over 300 karma points and garnered close to 100 comments.

“The dog didn’t seem phased at all. Brought back from the dead and the first thing he wanted to do was play. Damn I love dogs…” redditor coitusFelcher said.

Reactions to the woman’s response to the dog’s sudden condition were harshly criticized on both Reddit and YouTube, with many saying that they would not want to be anywhere near the woman in an emergency. Others stood up for the woman, claiming that they would have similar reactions.