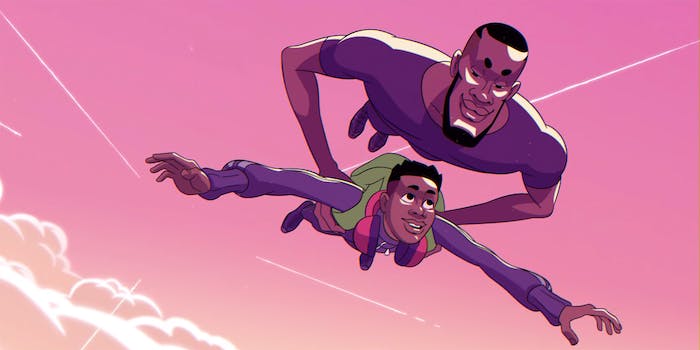 'Nothing but respect for Stormzy on this one.'

British rapper Stormzy warmed hearts all over the internet on Wednesday with a new music video for his track “Superheroes,” which he dedicated to the late Black Panther actor Chadwick Boseman.

The animated video is packed with uplifting visuals featuring young Black children depicted with superpowers alongside Black Lives Matter activists and fellow U.K. rappers Little Simz and Santan Dave. In the song, Stormzy calls on “young Black kings and queens” to recognize their power and keep an eye on each other.

The single comes from the London-based rapper’s 2019 album Heavy is the Head. Before the video’s release on YouTube, it was broadcasted in schools across the U.K. and accompanied by a personal message the rapper made to schoolchildren.

“I wanted to show it first to you guys first [because] being students at school, I think it’s important that you guys understand how powerful you are,” Stormzy says in the speech. “Despite the color of your skin, despite where you come from, despite your religion, despite whatever it is that you feel may be holding you back: you are a superhero.”

In addition to the message, the rapper included a text at the end of the video in memory of Boseman, who died last month from colon cancer.

Upon the video’s release, social media users praised the rapper for his touching and inspiring message.

“Nothing but respect for Stormzy on this one,” one Twitter user wrote.

Others also felt that the video’s motivating tribute to the Black Lives Matter movement helped boost love for themselves and their community.

One YouTuber commented, “People don’t understand how much self hatred you grow up with as a Black person and finally this movement [is] making me love myself and my people.”