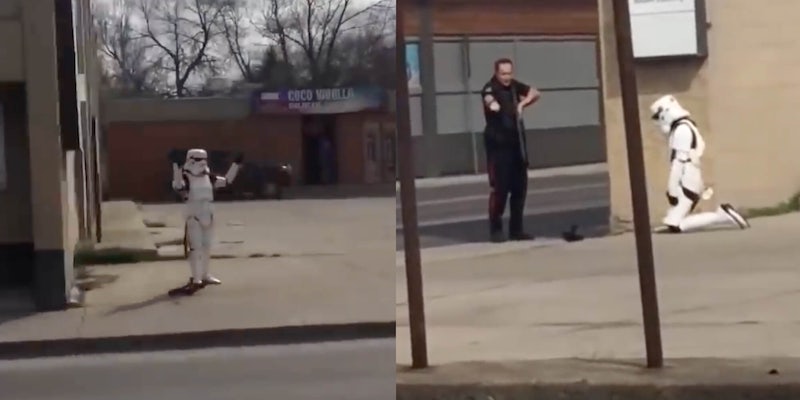 The Force was a little too strong in this one.

To celebrate Star Wars Day on May 4, a Canadian restaurant directed one of its employees to stand outside and wear a Stormtrooper costume. The Lethbridge restaurant employee was later arrested for holding a “plastic gun,” a Stormtrooper’s blaster that was part of her costume.

The Coco Vanilla Galactic Cantina employee also reportedly had her nose bloodied by police pushing her into the pavement. According to Lethbridge News Now, the restaurant employee was released at the scene with no charges.

The restaurant’s owner, Bradley Whalen, told Lethbridge News Now that he believes his employee was doing her best to comply with police orders to drop the weapon and get on her knees in a costume that’s difficult to move in.

“It wasn’t a matter of her not wanting to cooperate,” Whalen told the news organization. “She dropped the gun when they told her to and just forcing her, making her get down on the ground after they determined that she wasn’t a risk and that the gun wasn’t even a real gun, it was a plastic Star Wars blaster.”

Lethbridge Police Service Inspector John Walper told Lethbridge News Now that the force experienced by the restaurant employee was a result of failure to comply with officers’ orders.

“Their first response is to deal with that weapon and remove the weapon from the person, take the person into custody, and then allow us to follow up with that investigation to determine exactly what occurred,” Walper said.

But Lethbridge police are launching an internal investigation into the employee’s arrest. A video taken of the incident has brought the situation’s handling into question, according to a statement by the Lethbridge Police Service.

“Upon reviewing the file and additional information, including video circulating on social media, Chief Scott Woods has directed a service investigation under the Alberta Police Act that will look into whether the officers’ acted appropriately within the scope of their training and LPS policies and procedures,” the statement reads.

The incident came less than a week after a mass shooting in Nova Scotia that left 22 people dead prompted the banning of assault-style weapons in Canada across all provinces.