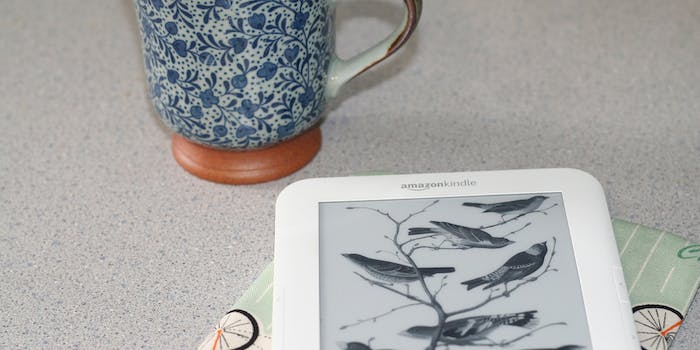 When my boyfriend surprised me with a Kindle for Christmas, I was skeptical.

I appreciated the sentiment behind the gift, of course. He had become accustomed to my routine of devouring a new book each week of the 11 months we had been together, and surely thought that an e-reader would be the perfect, steady companion for his insatiable lit-nerd girlfriend.

But little did he know that up until this point, I had been a closeted “real book” snob. While I resisted forcing my deeply rooted bias onto others, I preferred having “real books” to read on the El, on the plane, or curled up on my sofa with a warm blanket and cup of chamomile tea.

Why, I wondered, would anyone who cares at all about the importance of libraries and bookstores, or even just the comforting, kinesthetic experience of holding a book and breathlessly turning its pages, choose a tablet over the “real” thing?


In theory, I should have warmed to the idea of an e-reader. After all, the characters I grew up reading and relating to the most—Harriet M. Welsch, Matilda Wormwood, Jo March—loved to read and write just as much as I did, and probably would have jumped at the opportunity to have thousands of books literally right at their fingertips.

But instead, I developed something of a superiority complex: a pretension that many a vinyl record-listening, organic food-eating millennial wears like a suit of armor in these changing times.

I viewed “the e-readers” as a collective: discreetly hiding their mass-produced copies of Twilight and Fifty Shades of Grey behind the anonymity of their tablets, their faces aglow with the kind of tawdry romance novels that they wouldn’t be caught dead reading in public. And, as much as it nauseates me to think about now—harboring a vainglorious attitude toward total strangers—I found a smug satisfaction in that belief.

Still, I decided to give my e-reader a chance, partly out of love for my boyfriend’s thoughtful gesture, and partly because I was curious to see if my expectations would align with reality. Would I abandon my old friends—the hardbacks and paperbacks scattered across my room, each with their own history and sense memory, the familiarity of their old library book smell—for a shiny new model?

Three months later, the device that I told myself I would never buy, or buy into, has become a fond fixture of my daily routine. I never leave home without it.

No, I did not turn into a digitally brainwashed cyborg, dumbed down by modern technology’s insistence on quick and easy, style over substance.

On the contrary, I read more classic texts now than I ever have (Dahl, Shelley, and Nabokov this week alone) and light upon the work of up-and-coming authors and essayists whom I might not have been exposed to otherwise.

In fact, in a surprising—and yes, ironic—twist, I have learned that a Kindle can be a voracious reader’s best friend.

A few reasons why:

But just as I feel compelled to own certain albums on vinyl, while others I am content to stream on Spotify, I don’t see the problem with keeping a few dozen titles on my tablet for easy access. Ultimately, I’ve come to the conclusion that feels right for me.

Photo via Simply Bike/Flickr (CC BY 2.0)