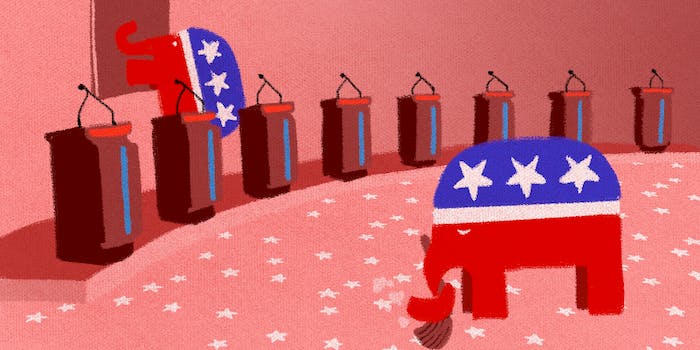 Being accepting of LGBT people isn't praiseworthy. It's being a decent human being.

Ohio governor and Republican presidential hopeful John Kasich has had a very good week. Despite better (but still abysmal) polling numbers, his performance at last week’s GOP debate has earned him so many cookies from the media that he might occupy Toll House before the White House. While the governor has received plaudits for his relatively moderate stance on policing, poverty, and Medicaid (which he expanded in his state), it’s his response to a question about same-sex marriage that’s has gotten the most attention and praise.

Asked by moderator Megyn Kelly how he’d explain his opposition to same-sex marriage to his children—should they come out as gay—he answered, “If one of my daughters happened to be ‘that,’ of course I would love them.” Trotting out the “some of my best friends are…” trope, he made sure to mention a gay wedding he’d attended. The crowd responded with rapturous applause, as though the governor was a hero on matters of LGBT rights. We’ve set a ridiculously low bar here.

Make no mistake: Kasich doesn’t deserve any praise for showing some semblance of compassion for LGBT people—especially when he’s not supporting their civil rights.

Simply incredible that Kasich got CHEERS for gay marriage on a GOP debate stage.

John Kasich has had two of the best answers of the evening, about poverty and about same-sex marriage. Good for him.

Just last year, Kasich told the Columbus Dispatch that he supported the Ohio Attorney General’s appeal of a district court ruling for same-sex marriage in his state. “The people of [Ohio], including me, voted years ago on a constitutional amendment to say that marriage is between a man and a woman,” Kasich said. He added that while a federal judge might rule otherwise, “it doesn’t change the fact of how people voted.”

The original case, in which Kasich was named as a defendant, eventually led to the Supreme Court’s ruling in Obergefell v. Hodges, legalizing marriage for same-sex couples in all 50 states. It’s an important fact the public has conveniently forgotten while praising Kasich, a man with a long track record of opposing same-sex marriage.

Yet “gracious and humane” is how Slate described his debate response. The Wall Street Journal called Kasich the “crowd favorite”—hardly surprising since the debate occurred in the governor’s home state, where he was last year re-elected with a solid majority—and praised his “solid performance.” Time went even further, labeling the governor as “the GOP’s Pope Francis,” drawing comparisons between his rhetoric and that of the current pontiff, who has famously asked—when it comes to gay people—“who am I to judge?”

Despite the seemingly conciliatory rhetoric, though, Governor Kasich still does not endorse equal marriage—so it seems incredibly unfair to laud his “nuanced response” when so many Republicans are actually supportive.

Senator Rob Portman, another Buckeye State Republican, made headlines two years ago when he publicly announced his change of heart after his own son came out. In the Obergefell case, more than a dozen GOP elected officials, and hundreds of pundits, staffers, and lobbyists, signed an amicus brief supporting same-sex marriage. And conservatives from Meghan McCain, the daughter of the 2008 Republican nominee, to Margaret Hoover, whose great-grandfather was a Republican president, have been supporters for years.

Make no mistake: Kasich doesn’t deserve any praise for showing some semblance of compassion for LGBT people—especially when he’s not supporting their civil rights.

This doesn’t mean that the big Republican tent is draped in rainbow bunting, though. While a poll by the Pew Research Center found that 61 percent of Republicans under 30 support marriage equality, the number drops to 32 percent when looking at Republicans as a whole. Across the country, Republican governors and state legislators have introduced or attempted to strengthen state Religious Freedom Restoration Acts, most notably in Indiana. That state’s Republican governor, Mike Pence, insisted that the bill wasn’t about discrimination, even though it definitely was. The backlash against the Indiana RFRA effectively killed Governor Pence’s presidential aspirations.

But Louisiana governor Bobby Jindal—who earlier this year signed a controversial executive order allowing businesses to discriminate against gay couples—promised in Thursday’s other Republican debate (for those not considered top-tier candidates) to sign a similar order if elected president.

Meanwhile, in Kentucky, county clerks seem to have forgotten that any attempt to delay performing marriages is as unconstitutional as denying marriage licenses to same-sex couples. Even fair-minded Republicans in Congress (not to mention the GOP’s LGBT organization, the Log Cabin Republicans) are failing to support the Equality Act, which would federally ban discrimination against LGBT people.

That’s incredibly important, as you can be fired—or not hired—for being gay in 29 states. (That number jumps to 34 if you’re transgender.)
Given the party’s troublesome history on same-sex marriage, Gov. Kasich’s softened tone on this issue appears much more enlightened than it actually is.

This is literally playing out like a Saturday Night Live skit. In 2008, when Queen Latifah appeared in a sketch as vice presidential debate moderator Gwen Ifill, she told the audience that “due to the historically low expectations for Governor Palin, were she simply to do an adequate job… you should consider the debate a tie.” In this case, the belief seems to be that should a Republican not compare gay marriage to slavery, you should basically consider them a conservative Barney Frank.

Can all Republicans just say what Kasich did on gay marriage?

So Kasich's position on gay marriage is basically Obama's from 2011.

But the position Kasich has taken, by acknowledging constitutional authority of the Supreme Court on marriage, is simply not enough. In Seattle, nestled within a state where marriage was legal years before the Supreme Court ruling, there’s been a 46 percent increase in LGBT hate crimes in the first seven months of 2015. The disturbing spike follows with recent national trends, which demonstrates that marriage alone won’t protect LGBT people.

This “hate the sin, love the sinner” appeal from Kasich might have been revolutionary in 1995, but in 2015, it’s a trite nod to, at most, politeness. As Daily Dot contributor Amanda Marcotte wrote at Talking Points Memo, Kasich “managed to distance himself from open bigotry without having to actually embrace gay rights.”

The problem for Kasich, and his media acolytes, is that we’re not in 2008. Even back then, opposition to gay marriage was problematic. Now it’s more than that—it’s homophobic.

Governor Kasich can’t even use the word “gay” in relation to his daughters, but if they were “that,” he says he’d love them unconditionally—except he wouldn’t. Kasich would still love his children, I’m sure, but he wouldn’t support what’s now been established as a civil right; in his worldview, they wouldn’t deserve marriage.

Instead, he allegedly supported civil unions in 2013, making him sound a lot like Barack Obama or Hillary Clinton in 2008. However, as the Washington Post reported, a Kasich spokesperson clarified that he actually did not support legal recognition for gay couples, despite previous remarks that suggested otherwise.

The problem for Kasich, and his media acolytes, is that we’re not in 2008. Even back then, opposition to gay marriage was problematic and homophobic. Now it’s even more than that—it’s woefully behind the times. Governor Kasich, and those lauding his comments, would do well to recognize that.