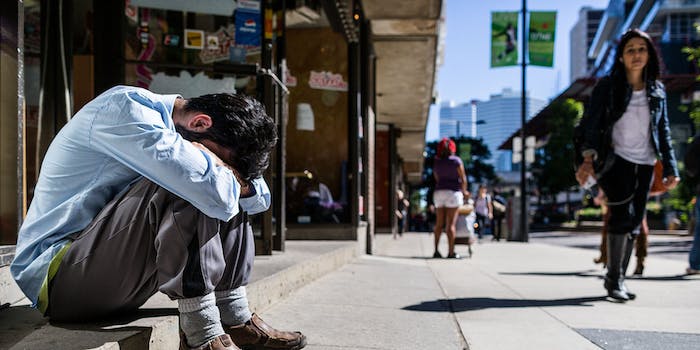 What a Google search tells us about ‘sensitive’ men

A Google search reveals eye-opening truths about what we think a "sensitive" man looks like.

Lately, I’ve seen a number of well-written and thoughtful articles about “highly sensitive men.” The 20 percent or so of men who, in theory, pick up on lots more information from the world around them. These articles seek to empower men who are more aware of emotional expression in the people they deal with. It is an effort to create space in our cultural dialogues for men who show pronounced empathy for others and manifest a wider range of male gender roles, such as care taking. All very important and very necessary. All very fine and good.

Now, Google “sensitive man” and look at the images that come up.

But don’t take my word for it. Let’s look at the Merriam Webster Online Dictionary’s definition of “sensitive“:

Highly responsive or susceptible: as
a (1) :  easily hurt or damaged; especially :  easily hurt emotionally
(2) :  delicately aware of the attitudes and feelings of others

How is it that empathic men have been collectively tagged with a term which defines them as easily hurt emotionally or delicately aware? How did the word sensitive suddenly become what we call these men? Who made that decision? Language is a powerful thing. You might as well be calling them “special” and dropping your voice slightly when you say it.

Don’t get me wrong. Most articles extoll the virtues of highly sensitive men. Why you should date one. Why you should get one as your nanny. But the language we are using is framing these guys as fragile; as if the capacity for emotional connection is a one way ticket to anxiety for men. Moreover, as much as these sensitive guys are being promoted as better husband material, there is still the ongoing subtext that women want a sensitive guy at home while they go party with the bad boys. Grotesquely, our cultural narrative about sensitive men undermines male emotional awareness as a recipe for being taken advantage of by women.

And so, we end up with yet another damaging binary. (God, we love those in American culture.) In this case, we are at risk of creating a false masculine binary that places over-emotional weepers on one end, and bull-in-the-china-shop alpha males on the other. Which does a disservice to men across the spectrum of our gender. I would suggest that all men have a capacity for sensitivity and emotional expression. Some just choose not to engage it. They turn it off. And for good reason.

So how about we change the whole conversation? First, how about we frame empathy as a natural expression of male strength, a sign of a more emotionally stable and capable man? Or better yet, let’s just pull out all the stops and make the capacity for emotional connection central to being thought of as a real man. Because the idea that only a limited number of men are “highly sensitive” reinforces yet again the damaging view of emotionally closed off masculinity as normative for men.

Yes, there are some contexts in which being compassionate is not immediately an asset. It sucks to be anything other than an emotional robot and play football with Richie Incognito. And yes, the prevailing (false) narrative in our culture continues to be that the thick skinned alpha males have the easiest time of it. And yes, to this day, we believe that women love a strong confident man. But here’s where I have to note a sea change.

But no matter how we are raised, the ongoing lack of emotional connection in our adult lives is a personal choice, not some gender-based genetic predisposition. Men who do not honor the emotions of others, who do not call on their natural capacity for empathy are at risk of living lives that are emotionally empty and unfulfilling. They drink too much, self medicate though consumerism or sexuality, and ultimately feel isolated. Its a choice a lot of men make, but it is by no means natural or predetermined. It is a choice. If a man chooses not to value empathy, it is most likely because he was not raised to see how central it is to living a full life. The result is a man who is isolated behind a wall of disconnection.

Likewise, boys or men, young or old, can make a very different choice.  They can choose to activate that most central of their human capacities; the ability to sense and value the emotions of others. It is a choice that results not in sorrow and fragility, but in laughter, joy, connection, and play. Moreover, it results in resiliency, community, capacity and strength; strength to weather the challenges of life and to help those they love do so as well. These men are not “delicately aware.” They are not “easily hurt or damaged.” They have made a choice to be strong. And in choosing to be strong in this way, they will change the world and the lives of those they love for the better.

So, enough with the “highly sensitive” man thing. How about we just call them men?