On Thursday, Chelsea Manning, formerly known as Bradley Manning, announced to NBC’s Today that she wanted to be referred to as female.

I want everyone to know the real me. I am Chelsea Manning. I am a female. Given the way that I feel, and have felt since childhood, I want to begin hormone therapy as soon as possible. I hope that you will support me in this transition. I also request that, starting today, you refer to me by my new name and use the feminine pronoun.

Reuters, CBS, the Chicago Tribune, the Washington Post, the New York Times, and CNN seem to have heard only half of the statement. They all covered the event, but they missed the point. 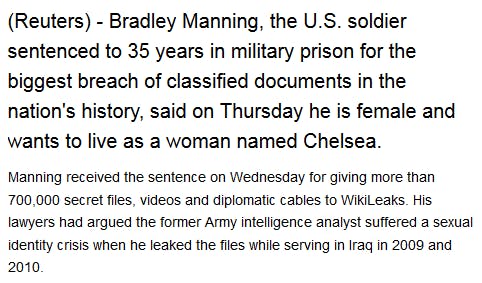 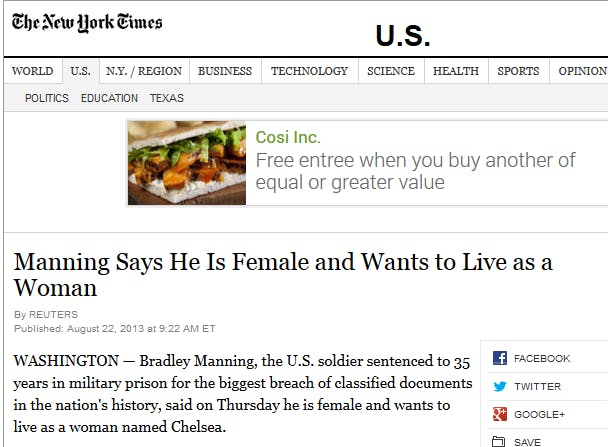 Bradley Manning is now Chelsea Manning. She will be referred to as “she.” She made this clear.

Misgendering Manning is more than a newspaper style choice. It’s an unethical journalistic practice that silences the transgender community. Worse, it perpetuates a harmful cycle of violence by sending the message that it’s okay for others to dismiss and override individual gender expression.

Sure, it’s breaking news and everyone was in a hurry to get their articles out the door. But it’s not as if the story of Chelsea Manning’s struggles with her gender identity were completely unknown to the general public, or more directly to the media outlets reporting her story. It’s not as if we, as journalists, didn’t have time to prepare for the possibility of needing to report on Manning as female. And even if we’d had no time, this is not a decision that’s up to you. The decision was made when Chelsea Manning asked the public to use “she.” There is no ethical excuse for the widespread failure of leading media outlets to switch gender pronouns.

Using female pronouns when referring to Chelsea Manning in writing is the clear responsibility of any media outlet who adheres to universal journalism standards. If you’re confused, the style guides spell it out. From the AP Stylebook (2009 edition): Use the pronoun preferred by the individuals who have acquired the physical characteristics of the opposite sex or present themselves in a way that does not correspond with their sex at birth.

If that preference is not ex-pressed, use the pronoun consistent with the way the individuals live publicly.

From the BBC Style Guide:

Do not refer to ‘transsexuals’, in the same way we would not talk about ‘gays’ or ‘blacks’. Transsexual people who have completed surgery to become a member of the opposite sex should be referred to as the gender they have become. Pre-operative transsexual people should be described as they wish. If their wishes are not known, and it is not possible to find out, take an informed view based on knowledge of the individual’s lifestyle. For example, it is reasonable to assume that a woman living as a man would wish to be referred to as ‘he’ rather than ‘she’.

This is a no-brainer. It’s a no-brainer because it’s in your stylebooks. But it’s also a no-brainer because a heartbreakingly high 41 percent of transgender respondents in a 2011 survey had attempted suicide. A 2010 study suggests the actual number is “more than half”—by far the highest suicide rate of any socially marginalized community.

It’s a no-brainer because nine out of 10 transgender teens report being bullied because of their gender expression.

It’s a no-brainer because the struggle faced by trans men and women to have their gender identity recognized is a serious, painful, everyday battle.

It’s a no-brainer because the media leads the way in spearheading how the public reacts in moments like these.

When the media reacts with scorn, mockery, and derisiveness when someone widely considered to be a popular hero informs the public about her gender identity, that tells the trans community that their own assertion of their individual gender identity doesn’t matter: that they are invalid, can be overwritten. Their desire to be seen for who they really are can be ignored.

And, what is perhaps even more damaging, the media is sending a message to the millions of other people who lack an awareness of the difficulties faced by transgender individuals. And that message is: What transgender men and women want doesn’t matter. Go ahead and laugh.

This is not a “slippery slope” argument. This is the reality for transgender men and women.

English Wikipedia’s entry on “Bradley Manning” is already redirecting to “Chelsea Manning.” (Edit: Never mind. It’s back to the way it was, pronouns and all.) If the Internet can get it right, journalists should not be lagging behind them. We should be leading the way.

Instead, journalists are adding their voices to millions of puerile jokes flying around the Internet this morning. They’re not even funny jokes.

Being a journalist requires recognizing and being ethically committed to reporting the news in ways that benefit society at large. It benefits no one to perpetuate the culture of silencing trans men and women.

We already knew that gender identity issues were a major part of Manning’s struggles with her military service. Manning’s decision to leak classified military documents to the public, and her subsequent 35-year prison sentence, is one of the most controversial events in U.S. military history. But refusal to accept her gender identity is not and should not be a part of her punishment. When reputable media outlets repudiate her right to her own gender expression, they are not just silencing Manning, but everyone who has ever struggled with restrictive gender norms.

Photo via the Daily Beast