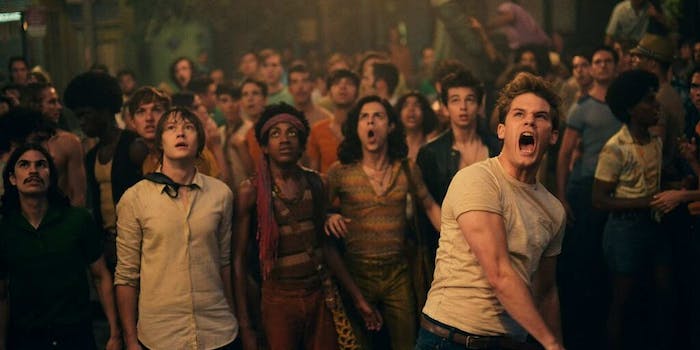 Give us a movie about LGBT people that's for us.

Unsurprisingly, the Internet hates Stonewall. Gawker blogger Rich Juzwiak tore the film a new one pretty spectacularly, but I think the most spot-on critique comes from Richard Lawson over at Vanity Fair. He points out that Danny, the movie’s fictional, white, pretty, cis-masculine protagonist, rejects the advances of Hispanic and gender-fluid Ray/Ramona in lieu of another white, pretty, cis-masculine character because the idea that a masculine, cis man (gay or otherwise) could actually fall in love with someone more on the margins is farcical to our culture.

And that’s symptomatic of a larger problem with the movie. The historical fact is that people on the margins—trans people of color—were the main actors in the actual Stonewall riots. By plopping a fictional pretty white cis man into the film to drive the plot, director Roland Emmerich’s thesis is basically, as Lawson says: “Yeah, I know in real life it happened to those people, but wouldn’t it be better if it happened to someone like this?”

Why aren’t the real stories of trans and queer people of color good enough for Emmerich? Well, he summed it up like so:

Danny is a very straight-acting kid. They can relate more strongly to him and through Danny’s eyes they’ll experience the more extreme situations depicted in the film. We had a lot of discussions about the sexual scenes and how far we should go or not go, and it was always very interesting.

What Emmerich is saying, there, is that in order for Stonewall to appeal to straight, cisgender audiences, the lead character had to be cis and “straight-acting.”

Stonewall was never created for the LGBT community. It was created for straight people. It was created to be palatable to audiences who have never had violence dropped on their doorstep day in and day out because of who they are. It was created to make sure that people who have never had to be uncomfortable in public because of their gender identity or sexual orientation or race continue to have comfortable entertainment experiences that do not challenge them to truly empathize with people whose lives are not precisely like their own.

In other words, Stonewall was made to make gayness acceptable to people who still think it’s wrong to “act gay”—like homophobes and transphobes.

Inasmuch as that’s the case, inasmuch as it was created for a mainstream culture that’s still homophobic (Kim Davis! The GOP! Star Wars fans!), it was created for profit—not for art. What else did anyone expect from the director of 2012? Stonewall was meant to make money off the backs of queer and non-binary folks, to take our community’s experience of ongoing violence and constant fear, caricaturize it, and then sell it back to the straight and cis people who either intentionally or unintentionally have been our predators and oppressors and bullies in the first place.

Stonewall doesn’t tell the story of the violence the LGBT community has suffered and the ways in which our community’s heroes have stood their ground against that violence. Stonewall is that violence. It is a horrifying irony.

The deep desire that’s being expressed in the queer community is that it would be great to have our stories validated as interesting, compelling, and relatable—because they are. Straight and cis people who are our family members and our loved ones and our friends and allies find us interesting and compelling and relatable precisely the way we are, don’t they?

But not only that. More importantly, we find each other compelling, interesting, and relatable, and LGBT people are a sizeable chunk of American moviegoers, too. Give us a movie about us that’s made for us.

Rebecca Vipond Brink is a writer, photographer, and traveler based in Chicago, as well as an Assistant Editor at the Frisky. You can reach her on Facebook and check out her blog at Flare and Fade.