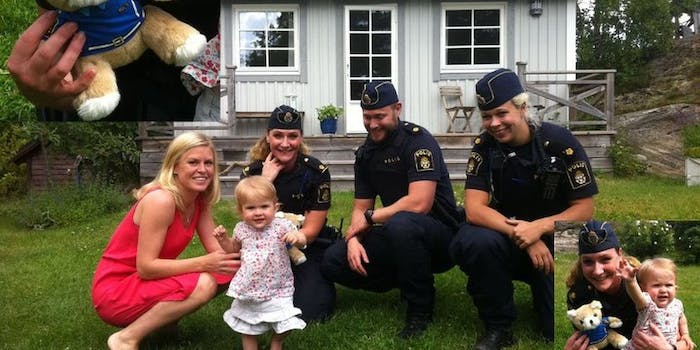 In June, an off-duty cop in Stockholm saw an opportunity to do good when he saw a black-and-white flyer for a missing stuffed animal.

It took 11 days, but police in the island district of Södermalm in Stockholm, Sweden have used Facebook to achieve justice.

They reunited a little girl with her missing teddy bear.

In June, an off-duty cop in Stockholm saw an opportunity to do good when he saw a black-and-white flyer for a missing stuffed animal. He took a photo of the flyer and uploaded it to his precinct’s Facebook page.

“Together, through ‘liking’ this picture, spreading the link, and keeping our eyes open, we can together make it so Tyra gets her beloved teddy bear back,” he wrote. That post gathered almost 1,500 likes and nearly 400 shares.

The girl’s mother said it was no ordinary toy.

“The teddy bear really means a lot to her,” she told Sweden’s Nyheter24 news. “She can’t sleep properly at night without it, and she searches for it when she wakes in the morning.”

It took a while, but it worked. On Thursday, after an anonymous citizen dropped off the bear, police returned it to Tyra and posted a photo of the reunion to Facebook. It’s written in Swedish, but according to redditor Lavane’s translation, it reads:

“The teddy was found on the stone wall by the Kungsholm church, not far from the location where it was originally lost, as common in this type of case.

The search and rescue operations command would like to thank all those involved for their persistence and effort!

When we care and help each other we can make a difference, you, me and everyone. See you later, and over and out.

PS. The Södermalm police department would like to wish you and everyone around you a really great summer!”

In addition to the teddy bear rescue, Södermalm Police have also recently posted photos of flowers, soccer, puppies, cans of beer, Easter Eggs, a pile of mouth guards, and people trying on police hats to its Facebook page.