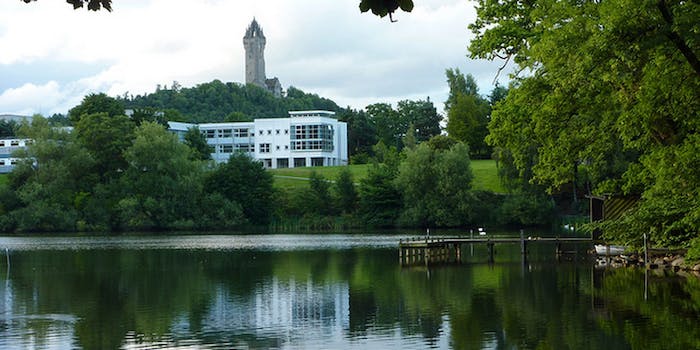 American frat bros haven’t yet cornered the market on public displays of sexism.

American frat bros haven’t yet cornered the market on public displays of sexism. Earlier this week, members of the men’s hockey team from Stirling University in Scotland were caught on camera singing a seriously offensive chant. The footage shows the team on a public bus, singing a call-and-response chant that included, among other things, Nazi salutes, jokes about miscarriage and sexual harassment, and racist epithets.

Filmed on a cellphone, the video shows the hockey players shouting the words while other people on the bus try to avoid attracting the team’s attention. With lines like “A lady came into the store one day, asking for an orgasm … Who gives a f**k what she got?,” it’s not really surprising that the hockey team’s unwilling audience doesn’t appear to be enjoying their public transport serenade.

However, some university students have pointed out that the hockey players’ attitude here is depressingly common. “I’m at uni now and these idiotic attitudes make women feel really marginalized and often quite threatened at uni by packs of men,” Josef Brodala wrote on YouTube.

And he’s not even on the bus with them.

If you’re looking for evidence of real people feeling threatened by this kind of behavior, look no further than the video itself. From a vantage point at the front of the bus, the footage clearly shows women looking tense and uncomfortable, leaning away from the hockey players as they shout jokes about sexual harassment. After one line that referenced “Jap’s eyes,” you can hear a woman call out, “How is that even funny?” and someone else say, “That is quite scary.” When the team finishes the chant with a joke about miscarriage, you can see one man at the front of the bus put his hands over his face in embarrassment.

Still, there are plenty of YouTube commenters who think people are overreacting to the video. “So its a crime to have a good time with your bros?” writes one, while another comments, “Typical feminists. It’s only sexist when men do it right? Where’s all the uproar for the countless videos/articles etc that make fun of men’s dicks?”

The video was uploaded by an anonymous Stirling University student using the screenname “camarua,” who made their feelings known when speaking to Fresh Air News. “I felt threatened and saddened by such an aggressive attack on women,” they said. “I could not believe some of the things they were chanting, they were so extremely vile, hateful and demeaning.”

According to the official Twitter feed for Stirling University, the video is now under investigation. While the students in question have not yet been publicly named or reprimanded, a debate with some of the hockey players is being organised by the university’s Politics Society, to discuss so-called “lad culture.”