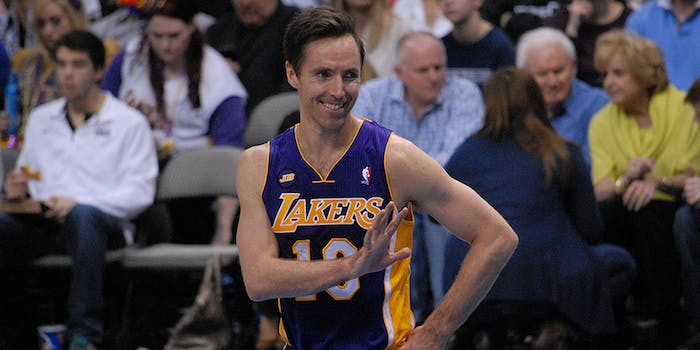 Los Angeles Lakers point guard Steve Nash got smacked with an interesting court ruling Tuesday when he learned through an Arizona appellate court that, in addition to a few other stipulations, he is no longer allowed to use Twitter say mean things about his ex-wife.

The ruling, an extension of Nash’s 2011 divorce from Alejandra Amarilla, was brought forth as a response to a “biting criticism” of the basketball star made on Twitter by the mother of his three children some time after the two split up.

It’s a stark order, indeed, and one that goes against a number of interpretations of the First Amendment, but the Arizona Court of Appeals ruled that such was OK; Nash and his ex-wife agreed to limit their speech under the joint custody agreement the two filed at the time of their divorce.

In lieu of ex-wife trash-talking, Nash will likely now spend more time tweeting about soccer games and the antics of his youngest child.

My 2yr old son walks up to a stranger and says ‘hurry up with my damn croissant’. And I was going for humble. Child services?

In addition to stipulations about his online activity, the appellate court also insinuated that Nash may have to pay more child support than he’s already throwing his Amarilla’s way.