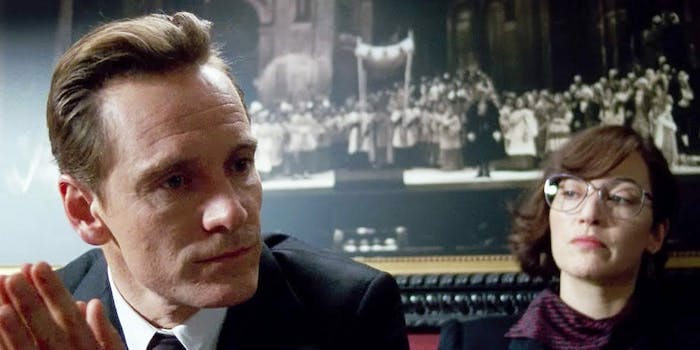 This is not a true story.

Viewers awaiting Danny Boyle and Aaron Sorkin’s Steve Jobs are preparing for the true story of the ingenious and emotionally complicated Apple mogul. But any movie that labels itself a “true story” operates on one of the greatest misconceptions in cinema. No film can ever really be credited with objective truth, as every story translated to the screen is filtered through the authorship of its filmmakers. Even a marathon of unedited security camera footage streamlined directly to a live audience is subject to the vantage points of the viewers on hand.

Nevertheless, many people look to would-be “true story” films, most often biopics, to uphold this rigid devotion to hard fact.

Some do as best as can be expected, expositing a timeline of major beats in a focal figure’s life story. Others employ what the forgiving call “poetic license” in the name of building a stronger film. These movies expense textbook precision in the name of a more thematic, spiritual truth, and as a result, incur the wrath of audiences who decree it a sin to stray from hard fact within the parameters of the biography—hence some of the controversy buzzing about Steve Jobs, in step with many cases in the past.

But is this method the one that yields the better movies?

The discussion of Steve Jobs’ canonical authenticity will no doubt remind us of a similar conversation surrounding another Sorkin-penned picture: The Social Network. Among the many challenges to the film’s validity include Mark Zuckerberg’s own defenses of his integrity and intentions in the development of Facebook.

Zuckerberg told a public audience at Stanford University in 2010, “The framing is that the whole reason for making Facebook is because I wanted to get girls, or wanted to get into clubs,” referring to the semi-unrequited love story, between Jesse Eisenberg and Rooney Mara’s characters, that framed the film. Zuckerberg’s real life relationship with the woman on whom Mara’s character was based ended long before the events of the film transpired.

Even a marathon of unedited security camera footage streamlined directly to a live audience is subject to the vantage points of the viewers on hand.

But The Social Network is just as much as movie about Facebook, and the generation of young men and women who pierced adulthood with it, as it is about Zuckerberg. The swapping of pragmatism and ambition in Eisenberg’s Mark for the lonesomeness, neediness, and desperateness for emotional affirmation is what a story about Facebook is the right choice for the character—even if unfair to the man on whom he was based in name—and for the story on the whole.

The Social Network offers likely the best parallel to the discussion surrounding Steve Jobs, but does keep company in plenty of other films.

We recall the outcries against Selma, which was accused of painting an unfair picture of President Lyndon Johnson in favor of further projecting the heroism of Martin Luther King and the uphill battle that was his voyage toward civil liberation across the race divide. A movie in which MLK got all the help he needed from the people in power to give it wouldn’t be a movie about the plight of the black Americans during and beyond the 1960s. It’d be a movie endorsing the complacency that so much of the country does abide by today, rather than demanding the necessary upheaval thereof.

It’s tough to argue that Selma hasn’t played a part in upping the volume in the outcries against racial disharmony in America over the past year. On the other hand, what good would a version of the movie have done were it to suggest to viewers, “Don’t worry—someone like LBJ will take care of this whole thing for you.”

On a smaller scale, we’ve seen imagination color the stories of creative minds like Bob Dylan (in I’m Not There), Andy Kaufman (Man on the Moon), Harvey Pekar (American Splendor), and Mozart (Amadeus).

Does incorporating mythology into the personal history of folk music legend Dylan betray his story, or does it simply pay credence to the idea that his reputation and legacy expanded far beyond the margins of a single man? Does blurring the facts around Andy Kaufman’s death really do the innovative performer a disservice, or does it instead serve to better capture the spirit of his life’s work? Does placing a fictional variant of Harvey Pekar right upon against the real man in an ambiguous melding of realities cost anything whatsoever in the recollection of his artistic forays?

A movie in which MLK got all the help he needed from the people in power to give it wouldn’t be a movie about the plight of the black Americans during and beyond the 1960s.

Of course, the strategy isn’t always used to a positive end. In The Doors, Oliver Stone’s take on Jim Morrison played up malevolence in the hopes of augmenting character complexity. Meanwhile, the spirit of ingenious oddball Morrison is lost in light of this reliance on the sinister. Ron Howard turned John Forbes Nash’s infliction with schizophrenia—which, in real life only manifested auditory hallucinations, rather than visual—into a guessing game thriller, losing the man and his work in the process.

But fact alone cannot be prized above all else in deciding the right choice for a character and a story. If the importance of Facebook is better told through an unrequited love story than an account of a business venture, then it should be so. If the recounting of the Civil Rights movement requires focus on the assailants over the abettors to more vividly illustrate its inherent struggle, then that’s the right way to go, too.

And if Bob Dylan, Andy Kaufman, Harvey Pekar, and Steve Jobs have to suffer through a bit of fiction in order to capture their essences most truthfully, then anyone interested in these men and their work would be remiss to completely reject these creative visions.