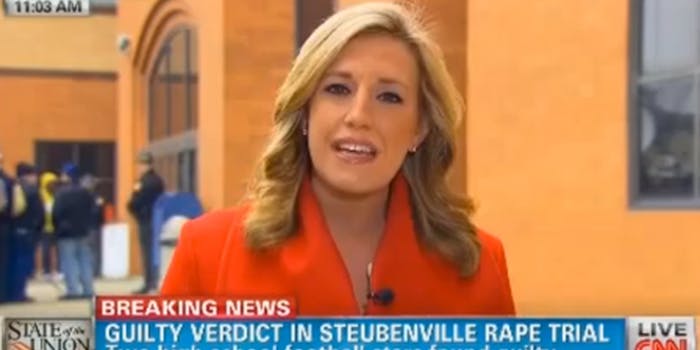 CNN's coverage of the Steubenville rape trial has been compared to an Onion story, and an online petition seeks an apology from the networks.

CNN’s coverage of the rape trial in Steubenville, Ohio has people so angry, they’re comparing it to famous parody newspaper the Onion. Respected news anchors have been accused of openly sympathizing with the convicted teen rapists, inspiring an outraged petition on Change.org and giving a two-year-old Onion spoof new life as a viral video.

In 2011 the Onion released a parody video-magazine piece offering the “heartfelt” story of a young basketball player who brutally raped a young woman, but overcame his rape and went on to become a sports hero.

Former Onion writer Krister Johnson found CNN’s genuine rapist-athlete coverage so disturbingly reminiscent of the Onion’s ludicrously fake stuff, he re-released the two-year-old parody on YouTube along with this explanation:

“I was a staff writer on the Onion‘s show ‘SportsDome’ which aired on Comedy Central in 2011. This is one of the stories we did—full credit to David Iscoe (twitter.com/realhumanbeing) for the idea and script. It could have been produced by the CNN team covering the Steubenville rape verdict.”

This quote is our favorite: “I cannot imagine how emotional the sentencing must have been … a 16-year-old, sobbing in court … what is the lasting effect of … being guilty in juvenile court of rape, essentially?”

What a dark sense of humor those Onion writers have—no, sorry, that was an actual quote from CNN’s Candy Crowley, discussing one of the teens convicted in Steubenville.

CNN anchors Poppy Harlow and Paul Callan made similar remarks about the rapists and their fates; as of press time, neither has publicly defended or apologized for the comments.

CNN’s controversial coverage inspired a petition on Change.org, demanding the network “apologize” for its anchors’ comments.

Whether the network responds or not, the damage to its reputation has already been done: Judging by the online backlash, most Americans disagree with CNN’s view of criminal jurisprudence.