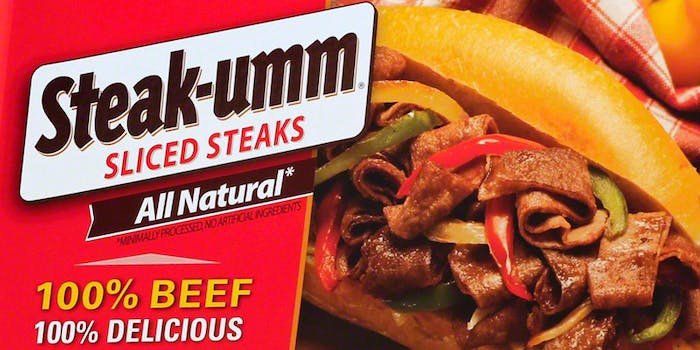 It’s easy enough to write off kids these days as apathetic, screen-obsessed zombies, but that’s not entirely fair. It’s nearly impossible to even imagine what it’s been like to grow up in the aughts—with rampant gun violence, the looming threat of climate change, a complete lack of job security, and whatever you want to call this orange nightmare person their elders voted in to lead our country.

Shit, it’s no wonder young people are disillusioned in ways that we’ve never seen before.

But while kids may feel like their parents, teachers, and other figures of authority don’t get them, they can rest easy because Steak-umm does. Or, more specifically, whoever runs social media for the supermarket brand of frozen steaks does.

On Wednesday, the Steak-umm Twitter account seemingly went rogue, unleashing a rant on why kids are turning to brands on social media instead of forging healthy, real-world connections. And man was it a doozy.

why are so many young people flocking to brands on social media for love, guidance, and attention? I'll tell you why. they're isolated from real communities, working service jobs they hate while barely making ends meat, and are living w/ unchecked personal/mental health problems

they're crushed by student loan debt, disenfranchised by past generations, and are dreading the future of our world every day from mass media addiction and the struggle to not just be happy, but to survive this chaotic time with every problem happening at once under a microscope

they grew up through the dawn of internet culture and have had mass advertising drilled into their media consumption, now they're being resold their childhoods by remakes, sequels, spinoffs, and other cheap nostalgia, making them more cynical to growth or authenticity

they have full access to social media and the information highway, but they feel more alone and insecure than ever. being behind a screen 24/7 has made them numb to everything, anxious and depressed about everything, and vitriolic or closed off toward anyone different from them

“Young people today have it the best and the worst,” wrote Steak-umm, concluding the rant—adding that because there’s so much to process and few trusted outlets to process it through, “They go to memes … they go to obscure or absurdist humor … they go to frozen meat companies on Twitter.”

It seems like adults are only beginning to grasp the effect social media has on young people, if season two of American Vandal is any indication, and as the tweet thread went viral, people began sympathizing with the plight of Generation Z.

Steak-umm out here trying to ted talk and I’m here for it https://t.co/XC9nfxyfMP

It’s fucked up that Steak-umm seems more aware of the current socioeconomic climate than our elected representatives https://t.co/RjkvXruK6s

recuperation is the process by which politically radical ideas and images are twisted, co-opted, absorbed, defused, incorporated, annexed and commodified within media culture and bourgeois society, and thus become innocuous or even profitable https://t.co/6FgCdiU0Ob

Things may appear to be grim now. However, many of these newly-minted 18-year-olds led by Parkland survivors and the #NeverAgain movement will be channeling this anger and discontent and taking it to the voting booths this coming November. But in the meantime, Steak-umm has got their back, which does not sound anywhere near as comforting as it should.