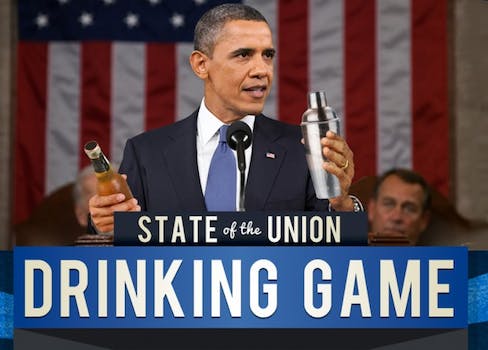 Online drinking games for the State of the Union

The Internet provides drinking games for Mardi Gras, Lincoln's birthday, and the State of the Union.

If you need a holiday-specific excuse to go drinking this evening, you have three options. President Obama is delivering America’s annual State of the Union address tonight. Today is also Abraham LIncoln’s birthday, as well as Mardi Gras.

All you need is alcohol and an Internet connection, and the web’s finest drinking games are available for your intoxicating pleasure.

State of the Union Drinking Games

DebateDrinking.com is a nonpartisan website dedicated to providing drinking games for all American political-themed events, whether they be Democratic, Republican or even third-party. Its 2013 State of the Union drinking game works regardless of your political sympathies but can be modified to suit both party loyalists or moderate drinkers, since it offers the option of choosing a party and drinking only when your side wins.

Drinkinggame.us puts out a State of the Union game for serious drinkers only. Full compliance with the rules requires you to not merely drink copiously, but drink different types of liquor in one night: tequila when Obama says anything in Spanish, PBR beer for mentions of Main Street, red-colored liquors whenever he mentions Communist nations—if you can handle this game, you have a stronger stomach than we do.

The Daily Caller’s drinking game is a good choice for people trying to reduce their alcohol consumption because, in addition to providing excuses to drink, it also offers multiple opportunities to throw perfectly good booze away, including “Whenever Obama says ‘jobs,’ pour eight percent of your drink down the drain” and “When Obama mentions ‘green energy,’ swirl your drink in a windmill-like fashion and pour it down the drain.”

The Huffington Post’s drinking game should be popular with anyone willing to bet on a long shot; it gives players the opportunity to polish off a whole bottle at once, provided Obama makes such unlikely admissions as  “I was really, really pretty much counting on that whole Mayan apocalypse panning out.”

ClotureClub.com’s SOTU game is for hardcore political junkies or college PoliSci majors, who drink whenever they recognize the faces of people like Sheila Jackson-Lee and Mitch McConnell.

If you’re at a Mardi Gras celebration, do you need extra reasons to drink? ModernMan.com offers a game for men attending an actual Mardi Gras street party.  But for the most part, anyone who takes Mardi Gras seriously enough to go to New Orleans is a purist, dedicated to drinking without gimmicky games.

That is a sad legacy for the Great Emancipator. A legacy so sad it’ll drive you to drink.