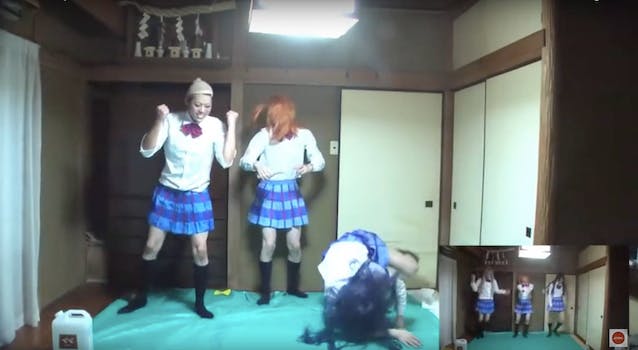 It's a slippery situation, alright.

“Start:Dash!!” is an insert song from the award-winning Japanese anime series Love Life!, which tells the story of a group of nine schoolgirls who become pop music stars to save their school from shutting down.

Here it is performed by the group, known as μ’s.

The original version is sung by just three of the group’s members, Honoka Kōsaka, Kotori Minami, and Umi Sonoda.

The version you are about to watch is not done by those three characters, but rather three men in drag. To up the degree of difficulty for what would normally be a piece-of-cake lip sync and dance routine, the trio rolled out a tarp and doused it in lube.

While the opening to this video may be uncomfortable (no one likes to watch lube being applied), the rest is some slip-sliding hilarity.

Keep your eye on the right-hand corner to see what the routine is supposed to look like. Also pay attention around the 2:26 mark. That tumble is terrific.