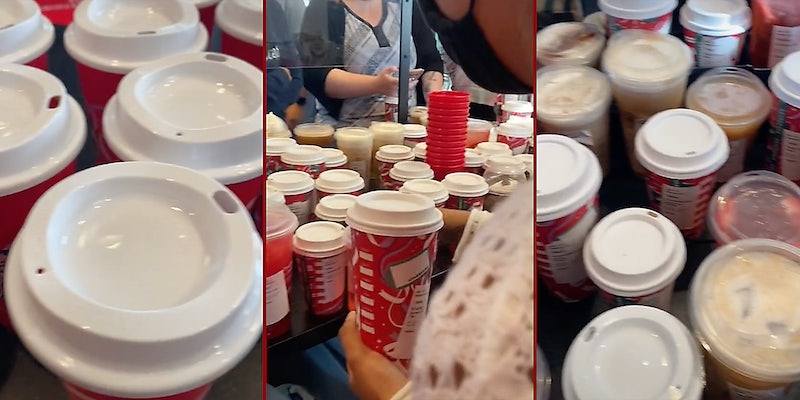 'Thank you for serving this country.'

An apparent worker, @hellokittyluvr24, filmed and posted the video, which shows a wild scene at Starbucks. Nov. 18 was Red Cup Day, and numerous locations across the country had similarly packed turnouts for the holiday-inspired cups.

The TikTok shows long lines and scores of orders (and red cups) being fulfilled. The TikToker uses audio from a man who says: “Oh my God. What the fuck, what the fuck. Punch my momma in the throat. Kick my daddy in the mouth. Hit my grandma in the—”

Brady Brewer, chief marketing officer for Starbucks, said in a release for Red Cup Day: “The reusable red cup has become a tradition for customers each holiday season and is a step towards reducing single-use cup waste as we work towards our planet-positive goals.”

The 50% recycled and gift-inspired reusable cup honors Starbucks’ 50th anniversary and can reportedly be claimed with handcrafted holiday or fall beverage orders on Nov. 18.

One viewer of @hellokittyluvr2’s viral TikTok said, “Imagine you’re SLAMMED, and your coworker is making TikTok.” The viewer later noted they were just joking, and the TikToker responded: “I record when I can, as you can see in one of the clips. I’m also making a cold brew. Most of us took video, as well as helping each other thru it.”

Another likened being a Starbucks employee to military service, saying, “Thank you for serving this country.”

The Daily Dot reached out to Starbucks and @hellokittyluvr24 for comment.