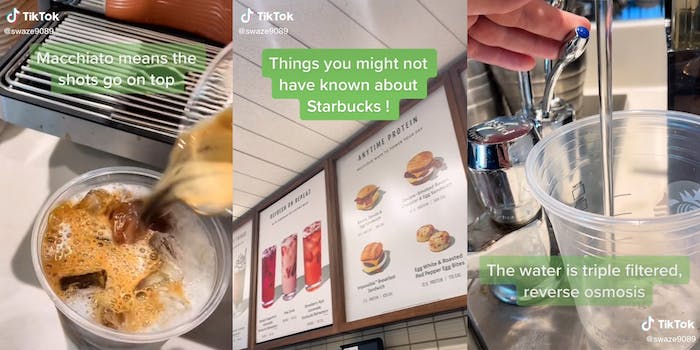 ‘That’s why i crave starbucks water lmao’: Starbucks worker shares things customers may not have known in viral TikTok

An apparent Starbucks employee’s video sharing some of the coffee chain’s alleged secrets has drawn great interest online, where viewers are learning new things about their most-loved beverages.

The first video of the series giving behind-the-scenes lowdown on Starbucks products has more than 1.9 million views. In it, @swaze9089 shows viewers that a macchiato has the espresso poured on top, blonde espresso has more caffeine in it than regular espresso, and nitro cold brew is regular cold brew infused with nitrogen.

“Things you might not have known about Starbucks !” the text overlay on the video reads.

Caramel macchiato beverages are also a misnomer, according to the video. The drink, the barista claims, is actually made with vanilla flavoring, and the caramel comes from a drizzle over the top. And Starbucks water is also triple-filtered by osmosis, lending to its taste, @swaze9089 claims.

Viewers were surprised, in particular, that blonde espresso had more caffeine than the espresso.

“Me, thinking blond espresso had less caffeine,” one commenter wrote.

“I feel like it doesn’t have any coffee taste at all,” another commenter said.

“Is it just me but blonde espresso don’t taste strong at all its weak compared to not normal espresso,” a third questioned.

Others pointed out that Starbucks’ method of teaching how to make macchiato beverages and why they are so named is non-standard across the barista experience.

“Macchiato means ‘mark’ or ‘stain’ like when you cross hatch with caramel,” one commenter wrote.

“It actually means espresso marked with milk in traditional Italian coffee,” another said. “Starbucks invented latte macchiato for no reason.”

This story has been corrected to reflect the TikToker’s username is @swaze9089, not @swayze9089.

The Daily Dot has reached out to @swaze9089 via Instagram direct message regarding her videos as well as to Starbucks via email.