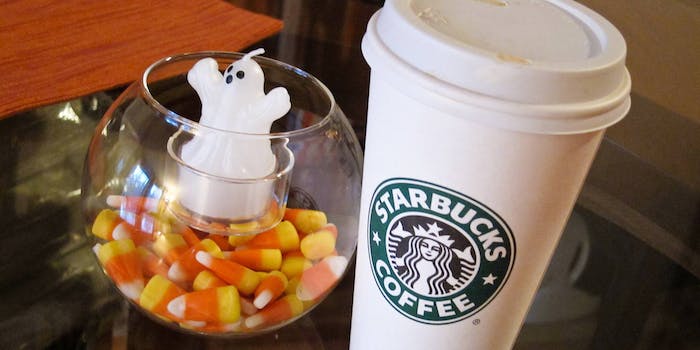 Keep calm and PSL on.

It’s time, fellow fall lovers. Our hallowed beverage is making its storied return to Starbucks once more, and earlier than ever before. Yes, haters, it’s the Pumpkin Spice Latte, or the PSL, the most iconic beverage the coffee chain has to offer. It’s here, it’s orange(ish) and, for many, it heralds the beginning of fall. And skeletons. And spooky stuff.

On Tuesday, Starbucks confirmed with Business Insider that the massively popular spiced drink is triumphantly marching into a store near you. The drink has been available for 15 years running, and every time it comes back into vogue, people fall all over themselves to make absolutely sure they don’t miss out.

This is a special event, too. This is the first time the Pumpkin Spice Latte will be available as early as August, as typically it starts to pop up at stores around the country in September, with “early access” in August for a select few customers. So now you don’t have to text a number for a special passphrase or code, or anything silly like that. You just need to head to your local Starbucks and get you some of that delicious, fall-flavored goodness.

As expected, people are absolutely freaking out. Grabbing a PSL (as us cool kids call it) at the tail end of August, before even Labor Day? Yasss, please!

Pumpkin Spice Latte comes back tomorrow and I am 100% getting one in 91 degree weather because this world is a shitshow and I take joy where I can get it, like in delicious flavored coffee drinks.

Its not even September yet & y’all already got pumpkin spice latte trending pic.twitter.com/pxf7pO6edi

me driving to starbucks at 5am on august 28th to get a pumpkin spice latte pic.twitter.com/OruoeY5eUC

Me walking into Starbucks tomorrow for the return of pumpkin spice latte pic.twitter.com/zkdOaIzO7e

Hello all the pumpkin spice latte comes out on Tuesday. From then on, you will most likely find me skipping through piles of leaves and spreading candy corn wherever I go with a PSL in hand.

The winds tickles my skin
The air flirts with a scent of cinnamon
A hushed chorus of giggles teases my ears
And on the galloping winds, I hear them whisper,

Some people aren’t as enthused as others, but that’s okay. Because they’re wrong. (Just kidding). Maybe they just haven’t ever had one before.

Kind of like these poor souls, who don’t know the beauty and the majesty of tasting one of these perfect, delicate drinks. We’ve got to change that for them.

I've never had the pumpkin spice latte from starbucks pic.twitter.com/mWcUVKvK3y

The rest of us? Well, tomorrow can’t get here soon enough. BRB, Starbucks run. Gotta get in line early, because they might run out.